Jim Eanes - In His Arms 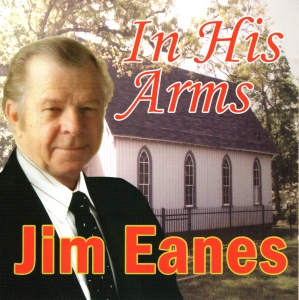 In a career that spanned more than 50 years, singer, songwriter, musician, bandleader, disc jockey and genial master of ceremonies Jim Eanes has created a lasting place for himself in the pages of bluegrass history. A native of the southwestern portion of Virginia, he grew up in the shadow of a musical father, banjoist Bob Eanes. As he grew up, Jim learned the craft of singing and playing guitar and often performed with his father. In the 1940s, he started doing live radio performances on stations close to home, including the popular WPAQ in Mt. Airy, North Carolina. In 1948, he was a charter member of Flatt & Scruggs' Foggy Mountain Boys. Not long afterwards, he was a member of Bill Monroe's Blue Grass Boys and made numerous appearances on the Grand Ole Opry. However, it was his work as the bandleader of his own Shenandoah Valley Boy that gained him his greatest notoriety. During the 1950s, He made memorable recordings for labels such as Capitol, Blue Ridge, Decca and Starday. Tunes from these sessions rate as some of the best bluegrass recorded during the music's formative years. In the 1960s, Jim turned his attention to radio work as a disc jockey. During this time, he performed as a solo act.

In the early 1980s Jim realized a career revival when he had a series of albums released on the Rebel label. The first of these was called Bluegrass Ballads (REBEL-LP-1643); a mixture of songs that were originally recorded for the now-defunct Leather label. Some of the songs had been released previously while others had yet to see the light of day. Jim arranged for several vocalists to add harmony on a number of tracks, thus giving the songs a bit of a bluegrass feel. His second Rebel release was comprised entirely of all newly-recorded material and featured a lot of recent Jim Eanes originals. It was called Reminiscing (REB-1653). Jim's third release on Rebel was a gospel outing originally entitled Let Him Lead You. It featured songs that he wrote or co-wrote with several composers and, significantly, Jim's name appears on all 12 songs. This recording was made at two separate sessions in the summer of 1988. The bulk of the recordings were made on July 31. The remaining tracks were done on August 5. It is this gospel recording that is the subject of this release.

As with any Recorded project, its success is a combination of musicianship, singing, material, and arrangements. Happily, all of these factors appear in abundance on In His Arms. The musicianship is first-rate. Jim chose a select group of pickers and singers who lived not far from his home in Collinsville, Virginia. Banjoist Craig Smith, a native of California who settled in North Carolina as part of the fine band Summer Wages, provided the excellent 5-string work heard here. A solid proponent of traditional Scruggs-style playing, Craig offers instrumental backing that is in total sympathy with Jim's music. In the years since working with Jim, he has toured and recorded with Laurie Lewis. He currently resides in Greensboro where he teaches banjo. Guitarist Ray Cline is a North Carolina native who appeared with Jim on several of his earlier recordings. Mandolin player Tony Williamson is another North Carolina native who, like Craig, is steeped in the traditional styles of playing. Tony has since recorded a number of solo projects as well as a duet recording of traditional hymns with his brother Gary. Jimmy Edmonds is a superlative fiddler from the musically rich area of Virginia and North Carolina between Galax and Mount Airy. He is revered as much today for his prowess as a recording engineer as his skill on the fiddle. Bass player John Palmer had a long friendship with Jim. He moved to Roanoke, Virginia in 1957 while working with Don Reno and Red Smiley and, consequently, John Palmer. In the late 1960s, John and Jim worked together as part of the Shenandoah Cut-Ups, a fine group that also featured Tater Tate and Billy Edwards.

A recent visit to the database of BMI-an organization that monitors and compensates writers for the public performance of their works-showed that Jim Eanes has 143 songs to his credit. That's an amazing number of songs for one person to lay claim to as a composer. It certainly helps to explain Jim's prolific outpouring of material on this collection. Of the songs featured here, two are re-makes of selections that Jim had recorded previously. In the late 1960s, he released an album on the County label that was recorded in conjunction with the Shenandoah Cut-Ups. Two of the songs they featured were "In His Arms I'm Not Afraid" and "Let Him Lead You". Both of these were written with Beulah Carrick, a songwriter that Jim worked with in the 1960s. Ironically, John Palmer appeared on the original 1960s recording of "Let Him Lead You" as well as this 1988 re-make. One of the songs, "When They Ring Those Golden Bells", is and arrangement by Jim of a traditional hymn that dates from the 1800s. The remainder of the songs were written with Lora Lowry, yet another co-composer who collaborated with Jim.

In his later years, Jim remained an active pitchman for his songs. Proving that these songs worked well not only for himself, a number of these selections were subsequently covered by other artists. Larry Sparks recorded "Old Satan" and Ralph Stanley used both "Welcome In" and "In His Arms I'm Not Afraid". Others such as Lynn Morris also made use of other Jim Eanes songs from this era.

Jim remained fairly active for another seven years following the making of this project. The onset of emphysema and several other ailments necessitated several hospitalizations for him in the middle 1990s but no one was prepared for his passing in November of 1995.

Since Jim's death, his music has encountered somewhat of a resurgence. The Bear Family label of Germany has reissued-on a single disc package-all of Jim's classic early 1950's recordings that he recorded for the Decca label. Starday Records issued an excellent 2-CD set of middle and late 1950's selections that he made with legendary sidemen Allen Shelton and Roy Russell. Happily there continues to be a well-deserved legion of fans that appreciate Jim's musical mission. As an impressive collection of song craftsmanship, musical performance, and inspired singing,In His Arms is yet one more important reminder of the valuable musical contribution that native Virginian Jim Eanes gave to the world of bluegrass and gospel music.