Jett's Creek - The Wait is Over 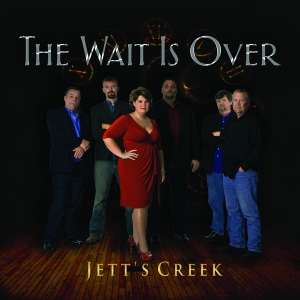 The traditional bluegrass tunes, tight family harmony and incredible original material by the 6-piece bluegrass band, JETT'S CREEK helped launch the band’s first national album release, “SUPPOSED TO BE” in 2008, and their second “GUILTY” in May of 2010. The California Bluegrass Association said Jett's Creek has "stirring vocal harmonies and carefully blended instrumentation" and WorldWideBluegrass.com calls their sound "authentic and doing justice to what bluegrass is all about."

The band members have a long history in bluegrass music and of course there is nothing like family tight harmony to give them their unique sound.
Angie Young co-produced the band’s album “Supposed to Be.” Angie not only provides her outstanding lead vocals to Jett's Creek, but she is an accomplished songwriter and producer. She penned the title track from “SUPPOSED TO BE” along with the captivating a cappela song, “The Prayer;” plus “Please” and “One Small Problem” appearing on “GUILTY” where she also served as Producer.

Angie’s Dad, Jon McIntosh wears several hats in the group. You will hear his lead vocals on many of the hard driving bluegrass tunes as well as rhythm guitar and harmony vocals. Jon was a founding member of the early 80’s bluegrass band, Misty Mountain based in Lebanon, Ohio. In the late 80’s he helped form the band Timely Arrival. After years of performing, Jon took a break to concentrate on his young family, but after retirement, he joined forces with his children, Adam and Angie, to form Jett’s Creek.

For this album Angie and the boys have called in long time friend and music monster, Clay Hess as producer. Because of Clay's busy schedule and a few problems he had along the way it has taken Clay over 2 years to get this record made. "THE WAIT IS OVER" speaks for several things beyond just the release of this great music. It also represents facing fears, reaching out and grasping the helping hand offered by others and the acceptance of our Lord and Savior.

Featuring 12 cuts from the country's best songwriters. Have a listen, you'll be glad you did.

1. Tortured Tangled 3:06 (Marty Stuart, Martie Seidel, Natalie Maines) Universal Publishing Group
It’s ironic that this is the track that kicks off the record. We actually cut this after everything was complete because we realized the project needed something in your face. I always loved this Dixie Chicks song so when I started looking for a quick fun song this one jumped off my play list.

2.Crazy out of My Mind 2:39 (Chunky Nelson)Warner Chappell Music/Sony/ATV Music Pub. LLC/Universal Music Pub. Group/Kobalt Music Pub. LTD
I have wanted to record this tune since I first found it on the world’s greatest time suck, YouTube. Loretta Lynn’s performance was just raw and you believed every word she sang. The guys are huge classic country music fans so they were thrilled we found a song like this to add to the collection.

3.Second Wind 3:45 (Steve Leslie- Darryl Worley) EMI Pub./Universal Music Pub. Group
Clay suggested this song. When we chose this one it was the first song we knew for sure we were going to have on the project and it really spoke to me. It was exactly where I was at the time. My life was in total upheaval and I was just waiting to catch my breath and find my new normal. I knew there were other people out there that were going through the same thing and needed to hear its ok... just be still and let it all settle around you.

4.When Angels Fall 3:06 (Barbara Wilkinson and Sonya Wood) Draw Four Music (BMI) / Target Top Ten Music (BMI) Mark Hodges at Mountain Fever pitched me this song. I loved the melody and the lyrics from the first time I played it. The contrast was great. The demo singer had this sweet innocent voice that lulled you into thinking she was being kind... then you realized she is telling some man off. A true art in my opinion.

5.Marry Me 3:33 (David Katz, Pat Monahan, Sam Hollander) EMI Music Pub./Chrysalis One Music
We were asked to play a wedding and the groom asked if we could learn this song for the bride. I admit I was a little cynical on the happily ever after front at that point but it is a really good song, so I agreed. After we worked it up for their wedding the entire band ended up really liking it. Has a different feel and timing because it wasn’t written to be a bluegrass song so it stretched us and challenged us. It has ended up being one of my favorites.

6.Try and Catch the Wind 2:34 (Mark "Brink" Brinkman & Dale Pyatt) Mark Brinkman Songs BMI
A tune we were going to record on our 2nd cd but ended up not using. We have performed it onstage for years and is a crowd favorite. When pulling material to record, this one was pretty high on the list because it’s just a solid traditional bluegrass song.

7.Fences 3:27 (Mark "Brink" Brinkman & Dale Pyatt) Mark Brinkman Songs - BMI
Another song that Clay brought to the table. He actually put it on hold before I heard it. My initial reaction was “gag, a love song. We don’t do love songs... we do shoot the man songs’’ BUT sure enough about a year into recording I had found my second wind and was having a change of heart. Clay being the producer must have sensed it because he waited until I was in the right place and I can honestly say I have lived that song and meant every single word.

8.Take Out The Trash 2:29 (L. Cordle /C. Leigh/L. Shell) Graham Sulivan Music/New Songs of Sea Gayle/Pier Five Music Inc.
Hands down the most fun and honest song on the whole cd. As women we try to portray this lady like persona like our mama’s taught us. The truth is, you get any group of women together and THIS is what comes out of our mouths with our closest friends. This is what you would hear if you were a fly on the wall in the ladies room of any bar on any given Saturday night. I let my girlfriends hear it and it was unanimous “YOU HAVE to record this! It’s AWESOME!” Ladies, I agree!

9.Back Home Again 3:44 (Adam McIntosh / Angie McIntosh Young) 3JL Music
The first song I had written since my husband passed away. I wrote it along with my brother Adam. I admit I am very nervous sharing something so personal. It’s a snapshot of my life and where I am on my journey. Quite a few on this cd turned out to be that way. But this one tells the story in my words.

10.Tina at the Teardrop Inn 3:42 (Mike Wells)BMI
Everyone in the band is a sucker for a story song. This one draws you in from the first line. The song was originally written and released in 3rd person. An outsider telling the story (which happens to be true) of what happened. Changing it to the jilted wife telling the story totally changes the feel of the song, making it personal. Throw in the fact that she shoots the man and well, it was a no brainer!

11.Finally Home 3:17 (Bart Millard, Barry Graul, Mike Scheuchzer) Simpleville Music/Wet As A Fish Music
A gospel song from a contemporary Christian group called Mercy Me. I heard it playing in the background of a TV show and liked it enough that I researched it. Once I heard the whole thing and read the lyrics it broke my heart. The first line “I’m gonna wrap my arms around my daddy’s neck and tell him that I’ve missed him” immediately made me think of my children. Such a beautiful song, there was never any question that it would be included.

12.My House of Memories 2:48 (Merle Haggard) Sony/ ATV Music Pub.
A Merle Haggard song Clay suggested. At first I was not sold on it but after a few months I realized it was because it hit a little too close to home. Of course all of the guys are Haggard fans so they were all for adding it to the collection. Now that it’s finished and I can see how far I have come from where I was the day vocals were cut, it seemed like the perfect track to end the cd with.