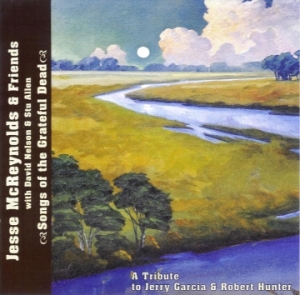 “Jesse’s singing voice is like a long-lost brother voice between Jerry Garcia and David Nelson. I enjoyed the new song we co-wrote, Day by Day. Especially liked the ‘McReynolds picking’ accompaniment, your signature contribution to bluegrass music.”
~ Robert Hunter, lyricist for the Grateful Dead


“It’s an honor and a thrill for me to be on this project. Fantastic that I was asked to play on it by one of my all-time heroes!! The session was filled with great moments. Plus the extra added treat of singing with Jesse on the Grand Ole Opry! All I can think is, “Pinch me, is this real?” Both the session and the Opry will always be revered among my greatest experiences.”
~ David Nelson, New Riders of the Purple Sage


“After listening, I was reminded of what made Jesse McReynolds a major influence for so many musicians and one of our country’s greatest music legends. His musicianship, singing, and arrangements should be heard by everyone. It is an honor for all of us at Woodstock Records to bring this music to the public.
Thanks to all who have helped keep the flame burning. With this CD it just got brighter and higher!”
~ Aaron “Professor Louie” Hurwitz, Woodstock Records – June 2010


“Jesse McReynolds is an American treasure, and the combination of his voice and mandolin with Robert Hunter’s lyrics and Jerry Garcia’s music is… wonderful." (August 2010)
"If Jerry had managed to live to 80 and been from the South, he'd sound like Jesse McReynolds," McNally says. "It's one of the great American voices singing great American songs."
~ Dennis McNally (official historian for the Grateful Dead) - Dec. 2010
39
What's This
Advertisement