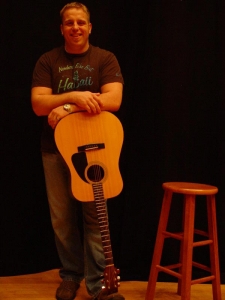 Jason Jakes started writing and performing music in high school. He made a promise to his grandfather that he would concentrate on obtaining a college degree before he put his focus on his music. Jason went to Tri-State University to attend college and play football. While at TSU he auditioned and was cast in the Rocky Horror Picture Show. Realizing his body could no longer take the abuse of football, Jason began to pursue entertainment and performing arts. During college he volunteered for the United States Army Reserves. Through the military he matured and gained a vast array of experience. Jason had the opportunity to travel with the U. S. A. R. to Korea, Japan, Germany, Kuwait, Spain, and Afghanistan. During these travels, he was able to perform for the troops along with his daily duties. Jason completed his B.S. degree in History at Purdue University. Since his graduation he's been devoting his time to writing, recording and performing while working to advance my career in the music business. Jason has been performing on stage with various bands and great musicians over the past several years. Jason has played with Western Haze, B&J Music, and Confused.
0
What's This
Advertisement