James LeBlanc - The Devil Between My Ears 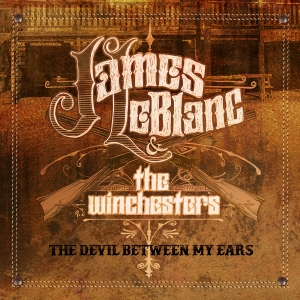 After years behind the songs that have become deep-seated in our lives and his 2017 acclaimed release "Nature of the Beast", James LeBlanc is now carrying his sense of genuine truth into the sound of a band-oriented record. In tunes such as “Modern Day Bonnie & Clyde” by Travis Tritt and title track “Relentless” by Jason Aldean, LeBlanc’s authentic approach to songwriting has become well-known by many and been what truly separates him from the rest.

Playing live and working with talent like Muscle Shoals artist/vocalist Angela Hacker, Grammy Award winner Jimmy Nutt and players that give a fresh approach such as Brad Kuhn and Evan Lane is what caused the sound of the new record "The Devil Between My Ears". Hacker, who is a previous winner of Nashville Star, brings a soulful southern vibe while singing lead on several of the songs on the album.

LeBlanc & The Winchesters recorded their new album The Devil Between My Ears at The NuttHouse Recording Studio in Sheffield, Alabama centered in the world-famous music mecca of Muscle Shoals.