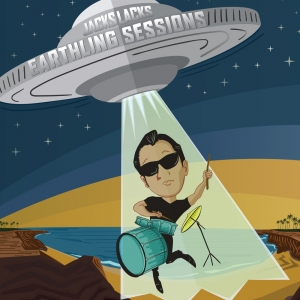 San Diego roots-rocker Jackslacks is back on the scene with a fine collection of original songs entitled Earthling Sessions. The full-length, eleven-track recording on indie label Shield Of Love is both markedly imaginative and entertaining, while remaining true to the distinctive and reverberating Jackslacks sound. The finely crafted, skillfully executed, guitar driven melodies are filled with tight harmonies and a backbeat that just won’t quit, all affectionately uniting the listener to a specific time and space when rock 'n roll music mattered most.

Some listeners portray the Americana sounds on Earthling Sessions as “pop-a-billy” which, if the term actually existed, might be explained as an approach to musical composition that honors American rockabilly, with a pop sensibility.

The framework for Jackslacks’ Earthling Sessions initially materialized through a combination of pure human emotion, honest self examination and scrupulous social observation. Add to that mix an acoustic guitar, tip-top local and national players, a chance meeting with renowned engineering ace Mike Kamoo at his Earthling Studios in San Diego County and legitimate rocka-rocka would come to pass.

Over the following few years, this new project, and partnership was birthed and nurtured, yielding a noticeably more layered approach to Jackslacks studio recordings, all of which seamlessly show up on this latest wave of original music. The sessions were fun, yet meticulous; the muso’s talented but temperamental. Still, an enjoyable collaboration developed between any number of kindred souls resulting in an eclectic mix of old school rhythms being laid down exclusively on and through vintage instruments, tube amplifiers and venerated recording gear.

Jackslacks is a member of the Blackcat Europe Rockabilly Hall of Fame and has opened shows for key players of the genre, including hero Carl Perkins, veterans Jerry Lee Lewis and Chuck Berry and a who’s who of second generation neo-rockabilly and Americana acts.