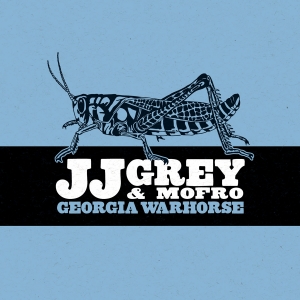 Singing with a passion and fervor directly influenced by the classic soul heroes, JJ Grey has written and recorded five albums of original songs steeped in the rhythm & blues, rock, and country soul of his native Jacksonville, Florida. Grey comes from a long tradition of Southern storytellers and he fills his songs with details that are at once vivid, personal and universal. After a decade of hard touring, he still spends eight months of the year on the road, bringing his music to a loyal, ever-growing, worldwide fanbase.

2010 sees the Alligator Records release of Grey's latest labor of love, Georgia Warhorse. Armed with eleven new original songs including one co-written with songwriting icons Chuck Prophet and Angelo Petraglia (Kings of Leon), Grey hit studio, Jim Devito's Retrophonics in St. Augustine, Florida. There, Grey would again track the majority of the instruments himself, playing guitars, keys, harmonica and delivering all the vocals with his gritty, straight-from-the-soul voice.

Joining him for a track is Grey's long-time musical hero and reggae icon Toots Hibbert, who sings with Grey on the The Sweetest Thing. "Toots is the greatest soul singer I've ever heard and one of my biggest influences," says Grey.Georgia Warhorse also provided the opportunity for Grey to work with another friend and hero, fellow Jacksonvillian Derek Trucks on the song “Lullaby.” "Derek Trucks is the greatest guitarist I've ever seen and I'm honored to have Derek and Toots on my record," says Grey.

Debuting in 2001 with Blackwater, following up in 2004 with Lochloosa, Grey steadily built his following one live performance at a time. Both albums (reissued by Alligator in 2007) were released under the name Mofro, a name the young Grey chose to describe his music and sound while still working his day job at a lumberyard. He has since used the word to name his band of ever-changing world-class players.

In 2007, with his first Alligator release, Country Ghetto, Grey reached an even larger audience, doubling both his album sales and his concert attendance. 2008's Orange Blossoms built on that energy, with even more fans, radio stations and critics coming on board. A 2009 best-of LP, The Choice Cuts, has kept the momentum going.

His songs have also appeared in film and on network and cable television programs including House, Flashpoint, Crash, Friday Night Lights, The Deadliest Catch, and the film The Hoot. In November 2009, JJ wrote his first film score for the critically acclaimed documentary, The Good Soldier, that appeared in theatres and on Bill Moyers Journal on PBS. Recently, Grey played piano, sang and contributed a song (“The Wrong Side”) to Buckwheat Zydeco's Grammy-winning Alligator album, Lay Your Burden Down.