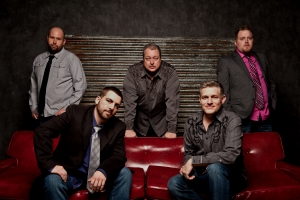 “Playing music is the easy part,” says Russell Moore with an ever-so-slightly rueful laugh as he looks back on more than thirty years of doing what he grew up wanting to do. “By the time we put this band together”—he’s talking about IIIrd Tyme Out, his musical vehicle for over twenty years now—“I was realistic enough to know that bands come and go. Being able to stay together is the hurdle that everyone faces. So I didn’t have a preconceived notion that someday I’d be celebrating twenty years with IIIrd Tyme Out—but I did feel like I would be playing music for the rest of my life.”

As it turns out, while many bands have come and gone since that May in 1991, Russell Moore & IIIrd Tyme Out have endured. In the process, they’ve managed to climb to the top not just once, but twice—winning a slew of IBMA vocal awards, including two Male Vocalist of the Year honors, in the mid and late 1990s, then persevering through rough times to see Moore recapturing the Male Vocalist trophy 3 more times in 2010, 2011 & 2012. Along the way, they’ve made a whole new generation of fans, and with the upcoming release, the quintet are poised to deliver their distinctive kind of music more widely than ever.

Yet IIIrd Tyme Out is hardly a one-man show, even with a frontman as spectacular as Moore. Wayne Benson, who joined the band nearly 20 years ago—just in time for the aptly titled Grandpa’s Mandolin—and stayed for nearly a decade before taking a job with the John Cowan Band, returned in 2007; his tasteful, influential approach to the mandolin is a focal point of the group’s instrumental prowess even as he continues to contribute in the vocal department. Behind him comes fiddler Justen Haynes; a member for nearly a decade, he’s a second-generation bluegrasser who’s earned the admiration of peers and fans alike for his supple melodic lines and tasteful vocal support.

Joining the veterans are two new members who, Moore says, have fit quickly and easily into IIIrd Tyme Out’s signature sound. Blake Johnson, a long-time member of The Hagar’s Mountain Boys and, for the past year, guitarist for Grasstowne, returns to his preferred role as bass player, while Keith McKinnon, who served memorable stints with his brother Kevin in singer Carrie Hassler’s band and in their own Still-House, takes over the banjo slot. Both men will also contribute to the group’s award-winning harmonies.

“As a band,” Russell notes, “it’s sometimes important to reinvent yourselves, your music and your show, to keep things exciting and fans engaged. Quite often a band member change can be the spark that lights that creative fire. I know the feel and excitement of being a new member of an established band, dating back to my days when I joined Doyle Lawson & Quicksilver, and it’s great to see and feel that same excitement from Keith and Blake.”