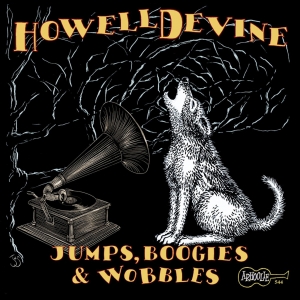 
Pete Devine was playing drums and washboard with Bo Grumpus when Chris Strachwitz came to see the ragtime trio some 22 years ago. The percussionist recalls that the producer didn’t like what he heard that night, although Strachwitz remembers that he did.

Whatever the case, Devine’s memory of that early encounter did not dissuade him from dropping by the El Cerrito, California, headquarters of Arhoolie Records years later with a copy of Delta Grooves, the debut release by a new retro-blues trio co-led by Devine and singer, guitarist, and harmonica blower Joshua Howell. (The CD was issued in February 2012 on Sparta Records, a label named after one of the percussionist’s numerous cats.) Strachwitz was so knocked out by what he heard that he drove across the bay to check out the guys doing an all-acoustic gig at the tiny Red Poppy Art House in San Francisco’s Mission District.

“It felt almost like sitting in a room in 1938,” the veteran record man says of the experience.
“They were so tight. Devine was playing a little washboard, and he blew into a jug and made sounds with his mouth. Josh’s voice was really nice. There was no overdoing or under-doing, just straight out, the way blues were really sung. He played wonderful. It was almost all slide guitar on a National steel, and he played harmonica on a bunch of ‘em.”

Jumps, Boogies & Wobbles, HowellDevine’s second CD, is something of a milestone for Arhoolie. Launched by Strachwitz in 1960, Arhoolie was essentially a blues label during its decade in business, with a roster that boasted such giants as Lightning Hopkins, Mance Lipscomb, Fred McDowell, and Big Mama Thornton. The producer’s interests gradually gravitated toward Cajun, zydeco, Mexican, and other styles, however, and after the 1986 release of The Beginning by young Louisiana bluesman Chris Thomas, the company issued no further albums of newly recorded blues, other than the blues-infused zydeco of Clifton Chenier’s son C.J. Jumps, Boogies & Wobbles is therefore the first new blues recording to appear on Arhoolie in over a quarter century.

Judging from the vibrancy Howell, Devine, and standup bassist Joe Kyle Jr. (for whom Safa Shokral sometimes substitutes) bring to the Mississippi blues of both the hill country and Delta varieties and Chicago blues selections on the CD, along with Devine’s own “Shotgun Blues” and the two instrumentals of his and Howell’s invention, it’s no wonder Strachwitz is so crazy about the combo. The players are thoroughly steeped in old-school traditions, yet they are no mere revivalists and instead approach their material with a fun-filled sense of adventure. Howell’s singing, as Strachwitz noted, is strong yet never forced, his prowess on both Epiphone Dot 335 and National Duolian resonator guitars is awe-inspiring, and his unamplified harmonica work draws favorable comparison to his heroes Sonny Terry, Rice Miller, and Little Walter. Behind Howell, Devine and the bassist churn up an amazing array of syncopated rhythms. Devine incorporates a washboard that rests on his lap into a standard kit of Gretsch drums and Zildjian cymbals as he complements the bassist’s propulsive, frequently slapped patterns. For Miller’s “Mighty Long Time,” in a version different from the one on the trio’s previous CD, Devine switches to jug.

Joshua Howell was born in San Francisco on January 13, 1974, and was inspired early on by the blues records in his parents’ collection. He took up harmonica at age 14 in the hope that it would help him stop biting his nails – it didn’t work – and guitar at 16. At 17, he often sat in at the now-legendary Oakland blues joints Eli’s Mile High Club and Your Place Too. He spent the first half of the first decade of the current century building classical guitars before relocating to Pai, a town in northern Thailand that boasts an international artists’ community. There he traveled by Moped between different bars and restaurants, playing three or four one-hour sets per night at each one, until, after three years, he was arrested, jailed, and deported for having worked without a permit. In July 2011, a year after returning home to San Francisco, he hooked up with Devine.

Pete Devine was born in Portland, Maine, on May 5, 1968, and as a child played along on pots and pans with his grandmother’s Louis Armstrong, Duke Ellington, and Spike Jones records. (Jones, he notes, was an outstanding washboard player.) He got his first set of drums when he was 6 and to this day uses the Ludwig bass drum pedal that came with it. Drummers Baby Dodds, Zutty Singleton, Francis Clay, Fred Below, and Earl Palmer rank high on his list of influences. He settled in San Francisco in 1989, a year before his 15 years with Bo Grumpus ended. His extensive resume also includes stints with Lavay Smith, Mal Sharpe, the gypsy jazz band Gaucho, Maria Muldaur, and his own Devine’s Jug Band.

On October 28, 2012, HowellDevine was selected by the Golden Gate Blues Society to represent Northern California in Blues Foundation’s 29th International Blues Challenge in Memphis from January 29 to February 3, 2013. That showcase, along with the release of Jumps, Boogies & Wobbles, is sure to serve wide notice of a sound that’s both old and breathtakingly new.