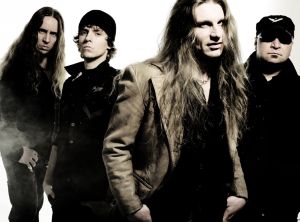 Thirteen years ago House Of Games was founded by vocalist Erik Meremaa in Tallinn, Estonia and within a year a self-titled album was released. What happened to the band between then (1994) and now is what happens to most bands: a string of changes, not only concerning the line-up. If one thing has to be mentioned about that long period of absence, it has to be the fact that the band became stronger and stronger. Throughout the years they have shared stages with such acts as Faith No More, Jethro Tull, Paradise Lost and last but not least The Rasmus.
Things finally moved into gear in the spring of last year. The band flew to the US of A, where they recorded some songs in the Bennett Studios under the guidance of no one else than producer Kevin Shirley. And while being there, they also played some gigs at famous NY clubs such as CBGBs and The Knitting Factory. Last summer the band continued recording their new album, this time at Seawolf Studios in Finland. The finishing touches were done by Hiili Hiilesmaa (mixing) at Finnvox Studios in Finland and Howie Weinberg (mastering) at Masterdisk Studios in NY.

The result, called Rise And Shine, is unbelievably good! To be honest, I didnt know that such a good melodic hard rock band could have come out from an unknown (as far as music goes) country like Estonia. All is done in an extremely professional way here: the songs, the arrangements, the performances, the sound, the production Im almost speechless. No wonder the band found a US partner with brand-new label Hurricane April Records! Vocalist Erik Meremaa sings with a personal style, which I myself like very much. They have They even have a their own touch and attractive sound. The whole album breathes so much professionalism.

House of Games has toured in Europe with worldfamous bands like Rasmus (Finland) and was the featured supporting Act for W.A.S.P. During their European leg of the Dominator Tour 2006, World Tour. HOG was well received by crowds and fans of W.A.S.P. in UK, Wales, Germany, Sweden, and more.

House Of Games doesnt sound as any band in particular as they have found their own niche.

Im impressed and so should you!