The Holmes Brothers - Feed My Soul 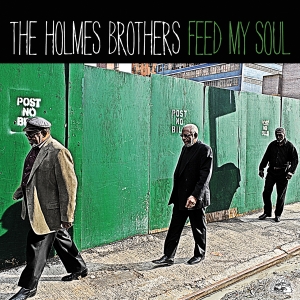 Over the course of their 30-plus year career, The Holmes Brothers (bassist/vocalist Sherman Holmes, guitarist/pianist/vocalist Wendell Holmes, drummer/vocalist and brother-in-spirit Popsy Dixon) have been feeding the souls of their devoted and ever-growing fan base with a joyous and moving blend of blues, gospel, soul, R&B, rock 'n' roll and country. Their amazing three-part harmony singing, mixing Wendell's gruff and gravelly vocals with Popsy's soaring falsetto and Sherman's rich baritone brings the soul and spirit of gospel music into everything they perform. Equally gripping is the rhythmic foundation laid down by Sherman's bass playing and Popsy's drumming, perfectly complementing Wendell's blues-soaked guitar solos and church-inspired piano playing. The band easily blends Saturday night's roadhouse rock with the gospel fervor and harmonies of Sunday morning's church service.

From winning multiple Blues Music Awards to sharing stages and recordings with Bob Dylan, Van Morrison, Bruce Springsteen, Patti Smith, Willie Nelson, Lou Reed, Peter Gabriel, Merle Haggard, Keith Richards, Al Green, Ben Harper, Lucinda Williams, Steve Earle, Levon Helm, Rosanne Cash, Odetta, and The Jungle Brothers, The Holmes Brothers have seemingly done it all. Recently though, The Holmes Brothers confronted a stark reality when brother Wendell was diagnosed with cancer in 2008. Tight-knit on and off the stage, they found strength in their family, friendship and faith to overcome this setback. With Wendell's victory over the disease, the group emerged fully energized and inspired to create the deepest, most original, most satisfying album of their career. Feed My Soul, produced by their longtime friend and collaborator Joan Osborne, is an album born from this harrowing experience. The songs deal with friendship, loyalty, family, aging, illness, as well as politics and the current state of the world, while still maintaining the patented Holmes Brothers sense of humor. Mostly though, the album is about triumphing over adversity, overcoming obstacles and, ultimately, it is a declaration of the power and faith of a strong and devoted family.

Feed My Soul features the band's exhilarating, spine-tingling harmonies, boundless energy and telepathic musicianship over the course of nine originals (the most they've ever penned for an album). The five fitting and perfectly executed covers include a poignant reinvention of The Beatles' "I'll Be Back" and the mesmerizing "Something Is Missing," a never-before recorded original by famed soul man John Ellison (writer of the classic "Some Kind Of Wonderful"). Opening with Sherman's worldly-wise vocals on "Dark Cloud," moving through Wendell's soulful singing on "Fair Weather Friend" and closing with Popsy's soaring voice bringing an emotionally fitting end to the album on "Take Me Away," Feed My Soul is a powerfully uplifting experience. It is by far and wide the deepest cycle of songs and most thematically linked body of work The Holmes Brothers have ever created. Sherman describes it as "an album of legacy and an album of hope."

Helping to shape Feed My Soul are the strength and deep roots of the Holmes family. Sherman and Wendell Holmes were raised in Christchurch, Virginia. Their schoolteacher parents fostered the boys’ early interest in music as they listened to traditional Baptist hymns, anthems and spirituals as well as blues music by Jimmy Reed, Junior Parker and B.B. King. Wendell told the Virginian Pilot, "It was a small town, and my brother and I were about the only ones who could play anything. I guess you could say we were large musical fish in a small pond. So we played around in all the area churches." The night before, though, they would play blues, soul, country and rock at their cousin's local club, Herman Wate's Juke Joint. "When he couldn't get any good groups to come from Norfolk or Richmond, he'd call us in," Wendell recalls. "That's how we honed our sound. We used to say we'd rock 'em on Saturday and save 'em on Sunday."

Sherman studied composition and music theory at Virginia State University, but in 1959, he dropped out and headed to New York for a promising job with a singer named Jimmy Jones (of "Handy Man" fame). His younger brother Wendell joined him in New York after completing high school. The two brothers played in a few bands before forming The Sevilles in 1963. The group lasted only three years, but they often backed up touring artists like The Impressions, John Lee Hooker and Jerry Butler, gaining a wealth of experience. Sherman and Wendell met drummer Popsy Dixon, a fellow Virginian, at a New York gig in 1967. Dixon sat in with the brothers and sang two songs. "After that second song," recalls Wendell, "Popsy was a brother." They continued to play in a variety of Top 40 bar bands—Wendell even toured with Inez and Charlie Foxx (Mockingbird)—until 1979, when the three officially joined forces and formed The Holmes Brothers band.

In the early years, the band worked primarily at Dan Lynch's, a New York club that featured weekly jam nights and performances by a wide variety of blues acts, most notably The Holmes Brothers. More importantly, the club served as a meeting ground for many members of New York's blues community, including future members of Blues Traveler, Joan Osborne and producer/harmonicist Andy Breslau, who brought the group to Rounder Records.

Since their debut on Rounder in 1989, The Holmes Brothers have worked virtually non-stop. In addition to their four critically acclaimed Rounder albums, they recorded Jubilation for Peter Gabriel's Real World label in 1992, becoming the first American group to record for the standout world music imprint. In 1994 they joined Van Morrison in the studio on the song "That's Where It's At" for the Real World compilation album, A Week Or Two In The Real World. 1996 found The Holmes Brothers starring in the independent motion picture Lotto Land, for which they also recorded the soundtrack. The albums all received massive praise. "Mind-blowing," said the Boston Herald. "Rich and satisfying," raved The Washington Post. In 1997, Joan Osborne asked The Holmes Brothers to be her backing band when she opened for Bob Dylan.

After signing with Alligator in 2001, The Holmes Brothers released the magnificent Speaking In Tongues, produced by Osborne, who also sang backup vocals throughout. With help from Grammy-winning engineer Trina Shoemaker (Sheryl Crow's The Globe Sessions), The Holmes Brothers created a contemporary album of spiritual soul music. Throughout Speaking In Tongues, the sweet gospel harmonies and classic soul shouting radiate authenticity and passion. Their interplay of voices and instruments is mesmerizing.

Response to Speaking In Tongues was phenomenal. The Holmes Brothers appeared on The Late Show With David Letterman, The CBS Saturday Early Show, as well as National Public Radio's Weekend Edition, A Prairie Home Companion and Mountain Stage. They were the subject of features and reviews in Rolling Stone, Billboard, Newsweek, USA Today, The Chicago Tribune, The Los Angeles Times, The Washington Post, The San Francisco Examiner and countless other publications. Greg Kot of The Chicago Tribune called it a "joyous, foot-stomping carnival…a gift to the world of music."

In 2003, The Holmes Brothers recorded versions of "Trouble" (Cat Stevens) and "You're Gonna Need Somebody On Your Bond" (Blind Willie Johnson) for the soundtrack album for the popular television series Crossing Jordan. In addition, The Holmes Brothers appeared on the M.C. Records tribute album to Sister Rosetta Tharpe, Shout, Sister, Shout!, backing Joan Osborne, Odetta, Victoria Williams and Phoebe Snow. That same year, Peter Gabriel released the single, "Burn You Up, Burn You Down," featuring backing vocals by The Holmes Brothers.

2004's Simple Truths found The Holmes Brothers receiving even more attention, as reviews ran in USA Today, Entertainment Weekly, Billboard, The New York Post, and many other publications. They appeared on Outlaws And Angels—The Willie Nelson and Friends 3rd Annual Birthday Concert (televised on the USA Network and released on CD and DVD), Late Night With Conan O’Brien, World Cafe, Mountain Stage, as well as the National Public Radio programs All Things Considered, On Point and Here And Now. The Chicago Sun-Times called Simple Truths, "A breathtaking and heartfelt journey through gospel-drenched soul, blues, funk and country." They won the coveted Blues Music Award from the Memphis-based Blues Foundation for Band Of The Year in 2005.

Since the release of State Of Grace, The Holmes Brothers’ popularity with fans and fellow musicians has continued to grow. They performed at Carnegie Hall's Tribute To Bruce Springsteen concert, featuring Steve Earle, Patti Smith, The Hold Steady, Josh Ritter and many others. In 2009 George Thorogood recorded Wendell's original song "Run Myself Out Of Town," on his Dirty Dozen CD, an album that hit #1 on the Billboard Blues chart. Recently, The Holmes Brothers completed a tour of performing arts centers with their old friend Joan Osborne (who has also toured with The Dead, Phil Lesh & Friends, and starred with The Funk Brothers in the film Standing In the Shadow Of Motown as well as releasing several great albums of her own).

With their deeply soulful singing, uplifting harmonies and unsurpassed musicianship, The Holmes Brothers continue to grow as artists. Billboard declares, "It seems like The Holmes Brothers get more assured and exciting with each passing year. They remain a musical force unto themselves." Triumphing over adversity led directly to the creation of Feed My Soul, as the band turned what may have been a career-ending event into the best album in their long history. With the depth of the songwriting and the power of their performances on this new album, The Holmes Brothers serve their extended family of devoted listeners a rich musical banquet for the soul.