The Holmes Brothers - Speaking In Tongues 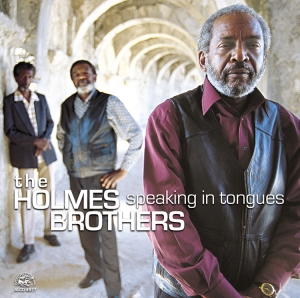 Their journey started in Christchurch, Virginia, where Sherman and Wendell were raised by their schoolteacher parents, who nurtured the boys' early interest in music. As youngsters they listened to traditional Baptist hymns, anthems and spirituals as well as blues music by Jimmy Reed, Junior Parker and B.B. King. According to Wendell, "It was a small town, and my brother and I were about the only ones who could play anything. I guess you could say we were large musical fish in a small pond. So we played around in all the area churches on Sundays." The night before, though, they would play blues, soul, country and rock at their cousin’s local club, Herman Wate's Juke Joint. "When he couldn't get any good groups to come from Norfolk or Richmond, he'd call us in," Wendell recalled. "That's how we honed our sound. We used to say we'd rock 'em on Saturday and save 'em on Sunday."

Sherman studied composition and music theory at Virginia State University, but in 1959 he dropped out and headed to New York for a promising job with a singer named Jimmy Jones (of "Handy Man" fame). His younger brother Wendell joined him in New York after completing high school. The two brothers played in a few bands before forming The Sevilles in 1963. The group lasted only three years, but they often backed up touring artists like The Impressions, John Lee Hooker and Jerry Butler, gaining a wealth of experience. Sherman and Wendell met drummer Popsy Dixon, a fellow Virginian, at a New York gig in 1967. Dixon sat in with the brothers and sang two songs. "After that second song," recalled Wendell, "Popsy was a brother." They continued to play in a variety of Top 40 bar bands—Wendell even toured with Inez and Charlie Foxx (Mockingbird)—until 1979, when the three officially joined forces and formed The Holmes Brothers band.

In the early years, the band worked primarily at Dan Lynch's, a New York club that featured weekly jam nights and performances by a wide variety of blues acts, most notably The Holmes Brothers. More importantly, the club served as a meeting ground for many members of New York's blues community, including future members of Blues Traveler, Joan Osborne and producer/harmonicist Andy Breslau, who brought the group to Rounder Records.

After their debut on Rounder in 1989, The Holmes Brothers toured virtually non-stop. They performed in 50 different countries, including dates across the United States, Canada, throughout Europe, and in Singapore, Japan, Russia, Turkey, South America, Africa, Australia and New Zealand. In addition to their four critically acclaimed Rounder albums, they recorded Jubilation for Peter Gabriel’s Real World label in 1992, becoming the first American group to record for the standout world music imprint. 1996 found The Holmes Brothers starring in the independent motion picture Lotto Land, for which they also recorded the soundtrack. Their albums all received massive praise.

The Holmes Brothers joined Alligator Records in 2001, releasing the Joan Osborne-produced Speaking In Tongues to overwhelming popular and critical acclaim. They followed with 2004's Simple Truths, 2007's State Of Grace and 2010's Feed My Soul (which debuted at #1 on the Billboard Blues Chart), and finally, in 2014, Brotherhood. Each release earned the band more fan and critical acclaim. The success of their albums led to multiple appearances on national television, including visits to The Late Show With David Letterman and two trips to Late Night With Conan O'Brien, as well as a rousing performance on CBS Saturday Morning. Profiles and concerts on NPR put them in front of millions of listeners. They appeared on Weekend Edition, All Things Considered, A Prairie Home Companion and performed on NPR Music's Tiny Desk Concert. They played their original song "Opportunity To Cry" with Willie Nelson for the Willie Nelson & Friends: Outlaws And Angels TV special.

With their deeply soulful singing, uplifting harmonies and unsurpassed musicianship, The Holmes Brothers' ability to deliver gospel fervor and raw blues intensity was as legendary as their ability to bring audiences to their feet. As Greg Kot of The Chicago Tribune said, The Holmes Brothers were a "joyous, foot-stomping carnival…a gift to the world of music."

ORIGINAL LINER NOTES
I was walking down Second Avenue in New York City on a frigid Saturday night, on my way to a party. At the corner of 14th Street a couple came out of a bar; as they opened the door a raw, beautiful noise spilled out behind them onto the sidewalk. The windows of the place were completely fogged up, so I pulled on the door; as it opened a wall of warm, wet air enveloped me. As my eyes adjusted to the darkness I saw a scene out of some fantasy Mississippi roadhouse. The room was solidly packed with bodies. The ceiling dripped with condensation, smoke hung in the low red light, a huge bouncer passed a tip bucket crammed with sweaty bills. Coke dealers and pool sharks and Deadhead college kids and suits and Polish barmaids were all, every one, dancing with abandon. Behind a slender bar rail, a three-piece band was working a sound that was greasy, sexy and slyly ferocious. Wendell on guitar grimacing ecstatically, Sherman on bass scowling with intensity, Popsie on drums looking like he wasn’t even trying; all three of them singing in a gritty, joyful roar — they rode the song to its finish and seemed to synchronize the heartbeat of everyone in the room.

I did not make my party that night. I stayed and The Holmes Brothers played, until four in the morning, whipping the people into a frenzy of dancing one minute and bringing the house down with a wrenching blues the next. They played soul, R&B, gospel, covered The Beatles and Hank Williams, rocked me and everybody in the place to our foundations. I have seen The Holmes Brothers many times since then, had the pleasure and privilege to sing with them and get to know them, but I don’t think I’ll ever forget what a revelation they were to me that first night.

When I became a part of the roots music scene in New York’s downtown clubs, The Holmes Brothers were a constant source of inspiration and amazement. The other musicians on the scene respected them enormously and made regular appearances at their gigs to get an education — to try to get some of that deep funk to rub off on them. I first met the men at a jam session at that same Second Avenue bar and I was shy, intimidated by their talent. But they were generous and encouraging, making me an honorary “Holmes Sister” and treating me like family. I soon learned that their heat onstage is a direct byproduct of their incredible warmth offstage. They are intelligent, funny, and if you’re not careful they will charm the pants off of you.

Fast forward ten or so years. The Holmes Brothers, among the first bands on the scene to get a recording contract, have made six albums, toured the world, recorded with the likes of Van Morrison, and served as cultural ambassadors to Africa under the auspices of the U.S. State Department. Their groove is so deep that techno producers have sampled them to create dance floor tracks (what a great image – club kids out of their heads and raving to the beat of Popsy, Sherman, and Wendell). When I got the call to produce this album, I was honored and I jumped at the chance. As these tracks prove, The Holmes Brothers have lost none of their fire; if anything, their playing and singing have gained a deeper dimension of soul and grace. Working with them was by far the most fun I’ve ever had in the studio, and many times during the sessions I found myself feeling like a student again, marveling at the ability of these three men to create their raw, beautiful noise.

Wendell, Sherman, Popsy - I am very grateful to you all for the chance to be a part of it.