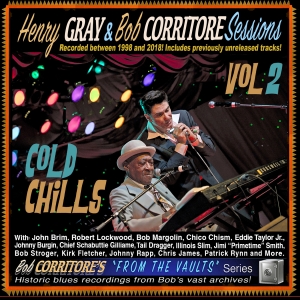 Legendary blues piano master Henry Gray and harmonica ace Bob Corritore joined forces in 1996 with regular trips to Bob’s Phoenix nightclub, the Rhythm Rhythm and to the recording studio. These shows and sessions continued until 2018 when Henry was no longer able to fly per doctor’s orders. This collection provides a 14 song serving of some of the great sessions that these two collaborated on over a 22 year period! In addition to eight Henry Gray vocal features, special guests John Brim, Tail Dragger, Eddie Taylor Jr., Jimi Primetime Smith, Chief Schabuttie Gilliame all add to the blues magic! This album is the third entry in Bob Corritore’s “From The Vaults” series.