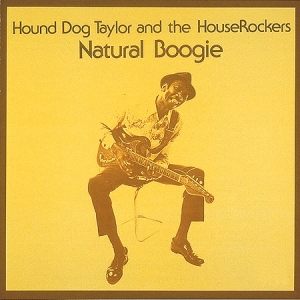 Back when Hound Dog Taylor and the HouseRockers weren't playing anywhere but the little taverns in Chicago's South Side ghetto, they had a very simple reason for making music. Hound Dog would climb on the bandstand, hit a lick on his old Japanese guitar and yell, "Let's have some fun!" These days the band appears in colleges and clubs from Cambridge to Ann Arbor to Seattle, but Hound Dog's philosophy hasn't changed at all. And neither has the HouseRockers' music. They still aren't happy until the audience is on its feet and dancing. Then, they're likely to play all night long.

Their music is blues, but it's good time, footstomping blues. Theodore Taylor, Brewer Phillips and Ted Harvey have been playing blues that way together for over ten years -- just for the fun of it.

Since the release of their first album, Hound Dog Taylor and the HouseRockers have earned a reputation as one of the tightest, happiest boogie and blues bands in the country. This album is just another taste of the kind of music they've played for years. Naturally.

Hound Dog Taylor died in 1975, but his music left an indelible impression on blues fans worldwide. Brewer Phillips and Ted Harvey still live on the south side of Chicago and still play together from time to time. Hound Dog used to say, "When I die, they'll say 'he couldn't play ****, but he sure made it sound good!'"
13
What's This
Advertisement