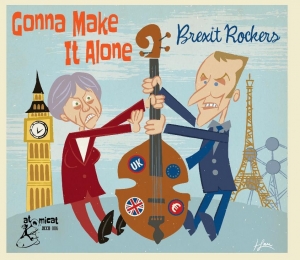 With a tongue firmly in the cheek through music this album has a humorous approach to the political uncertainty caused by the Brexit fiasco. The 24 songs on this Atomicat album are in no way political, they are fun rock ‘n’ roll songs, but the titles fit well with the situation. The Right Honorable Windbag Sir Insel Affe, through the song titles tells the ‘egg- traordinary’ saga of the situation. What is certain, politics and politicians divide people and nations, Europe is under threat. The last hope to stop the destruction of Europe, lay in our heads and the power of music, for Rock ‘n’ Roll music unites people.)

Here at Atomicat we do not like to get involved in political issues. However one day we were having a meeting (of great minds), which involved drinking a water based substance with an additive that makes you feel; great, wonderful, friendly, hug each other, reconfirm friendship and think differently. We played some random platters and we received ‘hidden’ messages, no the lyrics were not supernatural, however the song titles told a story. “Hey this is like the British wish for an independence from Europe”, said the man holding the party. Images of the movie ‘Independence Day’, came into my brain.
Strange events were actually occurring, terror in villages, towns and cities, people not knowing what was happening, what the impact would be to themselves and what the impact to the country would be from the Brexit situation. Strangely my students understood that this was not a good idea to pursue, each group from every course would ask me “why do the English people want to leave Europe?”

In simple terms let me explain using a recipe as the main explanation. The eggs were in the cake (the already made deal) and the British political elite wanted the eggs back, but why? Maybe to make scrambled eggs? It is still the same eggs, still the same ingredients, only used differently! The food was already cooked, but hey after years of harmony someone wanted to make a different meal, strangely from the same products. Politics and politicians divide people and nations, Europe is under threat. The last hope to stop the destruction of Europe, lay in our heads and the power of music, for Rock ‘n’ Roll music unites people.

This mixed up mess began under the Conservative Party rule and the leadership of Mr. Cameron, and Mrs. May carried on the fight that surely could not gain a result? The sorry affair began when those in power in Great Britain decided that the island had everything it needed to trade, be self-sufficient and ‘make it alone’. Voting to leave the European Union was strongly associated with holding socially conservative political beliefs, opposing cosmopolitanism, and thinking life in Britain is getting worse rather than better.

The talk in the House of Commons was, “I don’t need you no more” and they ‘typed a letter’ to Brussels about being ‘pushed too far’! There was to be no ‘talking it over’, someone had ‘done them wrong’, and several ‘lies’ were spoken (but by who?). The politicians were ‘singing the blues’, and “pity me” shouts the Right Honorable Sir Moneybags, I can invest my money off shore when we make a mess of the ‘deal or no deal’, and earn more money. ’Little’ Lord Fauntleroy the Third and the elite would become richer and have their cake and eat it (we return to the use of eggs as an explanation). Their brains were focused on money. However there was ‘something wrong with you’ the population, and the politicians did not understand, why their baloney was not working.
The Tories were united and not ‘cracking up’ under the pressure. Brussels repeatedly made ‘promises, promises and more promises’, so the inhabitants were informed! When workers ‘get paid’, the result was a ‘bad penny’ weak wage. The united Europe was weak and there was ‘no money in the (European) deal’, (well that is what the population were again told). Conservative Britain has everything ‘under control’, devaluing pound, weak exchange rate, longer working hours, it was all the fault of the European Union.

The information was ‘messed up’, and no surprise not everyone was fooled by the propaganda. Even though the population were informed they could put on ‘their walking shoes’ and gain independence, the same shoes were also suitable to walk around Europe. Although holiday costs are expected to rise. The soon to be red herring known as the blue passport, an idea of no use did not pacify the population, and passport control has gained additional problems. It was becoming clear to many politics is a dirty game, people were challenging and not happy with the way ‘your treating me’. Certainly pre the Brexit issue people could have lower cost holidays (exchange rates were good), and the Chancellor of the Exchequer gained more revenue from tourists (think here eggs, cake and scrambled eggs).
The European Union treats the people badly was reiterated, will it ‘work out’? Additionally the settlements from the divorce are not ‘easy payments’ for us, and it’s the fault of Brussels we don’t want your trashy Euro ‘it ain’t nothing but trash’ and harmony between us can never be. Those wise and rich politicians who have already secreted money in off shore banks (their version of eggs) still holler, “there are no benefits from a United Europe”, and the tax we save will never be claimed by ‘the revenoor man’, it goes to pay off privatization debt and bankers bonuses’. We are walking out on Europe and that is final, we are ‘going to make it alone’!