George Thorogood - Party of One 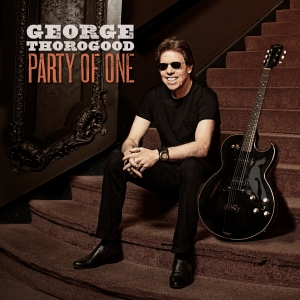 George Thorogood Biography
After 15 million albums sold worldwide, more than 8,000 live shows, and an uncompromising catalog of hits that has certified him as one of rock’s most relentless entertainers, one bad-to-the-bone icon has made perhaps the most unexpected creative statement of his 40+ year career.

Party Of One is George Thorogood’s solo debut album.

“A few years back,” Thorogood says, “there was an actress who was considering retirement because she thought there was nothing left for her to do. People asked, ‘Who do you think you are? Katharine Hepburn? Meryl Streep?’ And she said, ‘Not at all. But I don’t want to keep repeating myself.’ Personally, I’d never want to feel like I’m doing Bad to the Bone 2, Bad to the Bone 3, Rocky 5, Rocky 7, you know? So I asked myself, ‘What’s the one thing you’ve always wanted to do but haven’t done yet?’ And this is it.”

Party Of One is Thorogood’s long-awaited tribute to the artists that shaped his musical consciousness. “I can pinpoint the moment it happened,” he remembers: “Spring of 1965, The Rolling Stones brought Howlin’ Wolf onto the TV show Shindig. It was my first taste of the real deal, and it was amazing. So I started listening to people like Wolf, Muddy Waters and Lightnin’ Hopkins, and felt the rawness and the honestly of it all. I was hearing where bands like The Stones, The Yardbirds and The Animals got their thing, and realized it was all connected. So when I learned to play guitar, I was playing along to records by John Lee Hooker and Bo Diddley just to see what happened. I thought if I could eventually get people’s attention, it would validate my passion.”

Fans of Thorogood and his hard-rocking band, The Destroyers, might be surprised to learn that he began his career as a solo acoustic performer. “I was a street musician for a long time,” Thorogood explains. “And three months can seem like three years when you’re on the streets of San Francisco in the winter. But I finally scored a gig opening for Sonny Terry and Brownie McGhee, the greatest blues-folk act of all time. The club owner hired me on the spot. Brownie and Sonny wanted me to succeed, so every night I went out there and played better and better.”

Thorogood continues, “During that time, I also played with Hound Dog Taylor and Robert Lockwood Jr., who was taught how to play by Robert Johnson. I was kind of ragged in those days, but these were the kind of people who were in my corner. They all kept saying to me. ‘You’ve got the right idea, kid, but you’ve got to stay with it. You can do this.’ All these years later, that’s what this album means to me.”

Produced by Grammy-winner Jim Gaines – known for his work with John Lee Hooker, Luther Allison and Stevie Ray Vaughan, as well as several of Thorogood’s biggest discs, the 15 cuts on Party Of One are a potent platter of traditional blues, classics and modern blues benchmarks. The primarily acoustic instrumentation – including slide, Dobro, and harmonica – is performed entirely by Thorogood live in the studio with minimal overdubs.

Thorogood brings a distinctive intensity to standards by Willie Dixon (“Wang Dang Doodle”), Brownie McGhee (“Born With The Blues”), Robert Johnson (“I’m A Steady Rollin’ Man”) and the CD-only “Dynaflow Blues”), Elmore James (“Got To Move” and “The Sky Is Crying”) and John Lee Hooker (“Boogie Chillen”, “The Hookers (If You Miss ‘Im… I Got ‘Im)” and a blistering revisit of “One Bourbon, One Scotch, One Beer”).

“Didn’t Bob Dylan start out playing blues?” Thorogood asks. “His first gig, he opened for John Lee Hooker in Greenwich Village. Johnny Cash and Hank Williams all learned by listening to blues. People everywhere can relate to pain more than any other emotion. That’s why the blues will always be timeless.”

Another historic aspect of Party Of One is Thorogood’s return to Rounder Records, the venerable roots label with which he first signed in 1976 to record the three hit albums that launched his recording career.

“George’s coming back is a nice completing of the circle,” says Rounder co-founder Ken Irwin. “This record shows his talent as a storyteller in a very different setting, with all the emotion in his guitar and vocals. It’s a really intimate record, but it’s unmistakably a George Thorogood record, too.”

Co-founder Marian Levy sees the album as a return to roots in more ways than one. “You’d think it would be almost impossible to recapture,” she says, “but there’s immediacy to this record that harks back to the radicalism of the early Destroyers. In many ways, I think this record is a summation of George’s career.”

For Rounder Music Group Vice President of A&R Scott Billington – who is also the album’s executive producer – Party Of One is a vital new understanding of a unique American artist. “This wasn’t an easy record for George to make,” Billington says. “He had to viscerally reconnect with a time in his life when he was discovering who he was. But as you listen to these songs, you realize that he is and always has been an authentic blues player. This album is George Thorogood claiming his legacy.”

For Thorogood, Party Of One stands as the statement he himself is surprised it took over four decades to make. “I think this is a project that’s long overdue,” he admits. “Maybe it should have been the very first album I ever made. And after playing with the band for all these years, I had to kind of reverse my hands and my head in order to do this thing justice.”

Thorogood continues, “But I think Destroyers fans – and hardcore blues fans, too – are ready for the unexpected. My whole career, I’ve always said, ‘Just give them what you are, and they’re either going to dig it or not.’ This record is what I was, what I am, and what I always will be.”
39
What's This
Advertisement