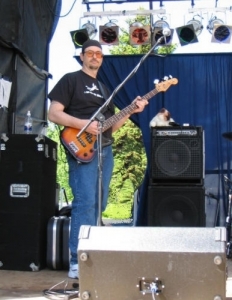 Frank Fogg has been around music and recording since he was a child, performing as a bass and guitar player. Starting out as a street singer in Cleveland, Ohio, he has performed onstage throughout Ohio and Pennsylvania for over 25 years with a number of Rock, Rockabilly and Country bands including The Long Shot Band, Led Foot Lytnyn, Sonixxx, Lynn Chapman Band, The Freed, Target, Saturn's Reign, State Line Band, The Influence and T.C. Free in addition to solo performances in North Coast coffee houses and jam nights.

He is currently the driving influence behind the Reaction 7 band, an alternative recording group with a variety of international releases, and manages the indie record label Very Generic Productions.
0
What's This
Advertisement