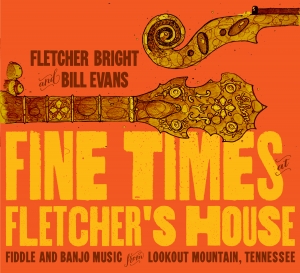 “You can’t go wrong if you play it right.” These simple but profound words were spoken years ago by the Cajun duo Octa Clark and Hector Duhon, but they fit the mind of 81-year old fiddler Fletcher Bright perfectly. For over seventy years, Fletcher’s been fiddling up a storm in his home state of Tennessee. He was there when Arthur Smith’s 78 rpm records were the hottest fiddling around. He was there when bluegrass was perfected by the Monroe/Flatt/Scruggs trinity, and, like so many other young fiddlers (he was in high school at the time), he fell in love with the blazingly original fiddle of the great Chubby Wise.

Inspired by Chubby, he formed a bluegrass band, The Dismembered Tennesseans, with fellow students. This band is still playing today, over sixty years later! An ever-diligent student with an insatiable curiosity, he was there studying when newcomers like Mark O’Connor and Byron Berline revolutionized the bluegrass violin. He was there when another new generation, led by The Punch Brothers, again redefined bluegrass, and he was an inspiration to a young Noam Pikelny. And he’s here now, 13 years into a new century as bluegrass has attained a greater grip on the American cultural mainstream than ever.

Let the generations come and go, let time roll on by, Fletcher Bright won’t change his course. He’ll keep steering his riverboat fiddling straight ahead, taking time to explore some of the many divergent streams of American fiddle traditions, but never veering too far from the main current of bluegrass fiddle that he’s been navigating, all the way from the original source of the music.

Fletcher’s new album, Fine Times at Fletcher’s House, is a gloriously impromptu affair, a series of lively and joyful duets with the great American banjo player and scholar Bill Evans. The two friends met at some of the many music camps they both teach at over the years. Fletcher’s known as a gracious and inspirational teacher, but he’s also the kind of person who can put his own ego aside and join other classes to learn new tunes and new riffs on the fiddle.

Bill Evans became a favored jamming partner for Fletcher, and Fletcher approached him directly to cut this album, figuring he’d better record it before he got too much older. For Bill, this album is a more traditional outing than his last recording, 2012's "In Good Company," which featured guest spots from celebrated bluegrass musicians and was widely acclaimed for its inventive arrangements. For this album, Bill looked to focus solely on fiddle and banjo duets, one of the oldest combinations of instruments in American roots music.

The two retreated to Fletcher’s home on Lookout Mountain in December 2012, and sat down for a few days together playing some of Fletcher’s favorite tunes. This music wasn’t extensively rehearsed, and it was recorded with minimal interference. This is exactly how the music is played and enjoyed off the stage today–just two friends reveling in the tunes they love so much. There’s something beautiful and refreshing in how much fun the two are clearly having together.

The tunes come fast and furious, from the rapid-fire fiddling of the Benny Martin tune “Two O’Clock,” to the haunting ancient tones of Marcus Martin’s “Polly Put the Kettle On.” Fletcher’s diverse taste brings tunes like the Shetland classic “Da Slockit Light," here given a tastefully subtle accompaniment from Bill’s banjo, and “Going to Israel,” learned from Seattle fiddler Ruthie Dornfeld. Generations touch hands across the decades here, as with the Arthur Smith tune “Fiddler’s Dream,” which Fletcher first heard Bill Monroe’s band play in the 1940s, and the tune “Greasy Coat,” an old-time tune whose setting comes from three young Berklee College fiddlers that Fletcher heard a few years ago.

If Fletcher and Bill's album seems eclectic, that because Fletcher came of age at a time when the separations between music genres weren’t so distinct as they are now. That’s why you can hear so many different influences in his music. You can hear the droning, keening wail of Tennessee’s Appalachian mountain traditions, you can hear the swift edginess of modern bluegrass solos, you can hear the old call of the original Celtic roots of the music, and you can hear the simple joy of the tune, as two great masters sits down to hammer out some great music together.

"Fine Times At Fletcher's House is a real joy. Fletcher Bright is a national treasure, and this album offers listeners a chance to experience his fiddling and wonderful spirit as if you were present for a late night jam at his house or under the moonlight at a festival. Bill Evans plays with great tone and his timing is in excellent sync with Fletcher every step of the way. This is a great showcase of the fiddle & banjo duet; the tune selection is thoughtful and the final result is both classy and endearing," Noam Pikelny, The Punch Brothers.
8
What's This
Advertisement