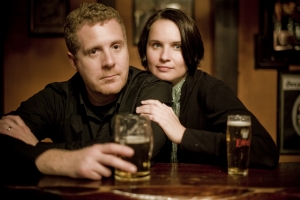 F&M is a gently sardonic, dark and hopelessly clever art-folk band that began as a 48 hour experiment in recording during a fireworks festival. Delicate, glacial, heady, this Edmonton duo approaches folk music with refreshing maturity and restraint. Music that breathes.

F&M's roots began as Ryan Anderson’s experiment in self-recording. Ryan prefers to think of himself as “experience-trained.” He believes in the cocktail-napkin method of song-writing: a brilliant idea could hit at any moment and he has never written two songs the same way. He draws his musical inspiration from some of his favourite artists — Leonard Cohen, Smog, Will Oldham, and The National, to name a few — from famous playwrights like Bernard Shaw — and from human experience. He was once approached after a gig and told “You sing the saddest songs, but with the biggest smile!” After a hiatus to travel and study, F&M grew into a collaboration between Ryan and Becky Anderson, with new music, an updated image, two additional musicians stolen from a defunct electronic-pop band, and a long lost brother to play the bass.

Becky acquired formal music training on the pipe organ, but is mainly self-taught in piano, accordion, guitar and cymbeline. She is rooted in deep academic longings and completed a Masters in Soviet Russian Rock Music Culture. When performing, she has a dramatic playing style and will often leave her microphone to just walk out into the audience to sing and play the accordion acoustically. Becky draws her inspiration for her music not only from her background in literature and music, or some of her favourite artists — like Dean and Britta, Beth Gibbons of Portishead, and PJ Harvey — but also from the imagery of the circus and even the violence of birds.

F&M tour western Canada but are planning to come out east very soon! This year F&M made their European debut in Germany and plan to return. Recent accomplishments for F&M are receiving a Rawlco 10k20 recording grant, showcasing at the 2008 Western Canada Music Awards, participating on CBC National Radio program GO!, charting nationally on the college charts, regional media reviews, supporting environmental awareness with ACTV, and live radio opportunities. F&M is versatile - playing as a trio or a full five-piece band. F&M is never afraid to go quiet.

Currently F&M tours as a trio:Ryan and Becky Anderson and the talented Bryan "Miot" Reichert.
0
What's This
Advertisement