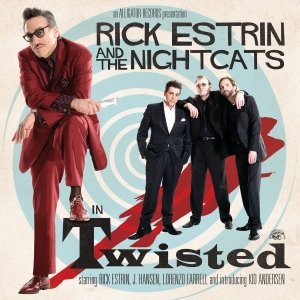 One day back in 1970, a 20-year-old Rick Estrin had the opportunity to play harmonica with Muddy Waters and his band at the Sutherland Hotel at 47th and Drexel on Chicago’s South Side. During the break, Muddy called Estrin over, shook his finger in his face, and shouted, “You outta sight, boy! You got that sound, boy! You play like a man, boy!”

Rick Estrin ranks among the very best harp players, singers and songwriters in the blues world today. His work on the reeds is deep in the tradition of harmonica masters Sonny Boy Williamson II and Little Walter Jacobs, while at the same time pushing that tradition forward. The Associated Press called his harp playing “endlessly impressive.” The great guitarist Robert Lockwood, Jr. (who was schooled by Robert Johnson and who played on most of Little Walter’s Chess recordings) told Estrin, “Little Walter would be very proud of you.” His award-winning original songs have been favorably compared with those of Willie Dixon and the team of Leiber and Stoller. And his hipster, street-smart vocals are the perfect vehicle for driving those songs home.

For more than 30 years and nine albums, Rick fronted the jumping, swinging Little Charlie & The Nightcats, featuring guitarist Little Charlie Baty. With Baty’s recent retirement from touring, Estrin—along with the Nightcats’ longtime rhythm section of J. Hansen and Lorenzo Farrell and a new member, fiery guitarist Kid Andersen—takes the lead on his own. The band’s debut album, Twisted, while still swinging the blues, is a harmonica-driven, rocking, guitar-fueled rave-up. Featuring 14 songs (including 10 Estrin originals, two by Kid Andersen, one by Hansen, and a superb band-created instrumental), Twisted showcases Rick’s seemingly effortless command of the harmonica, his streetwise vocals and his remarkable original songs.

In addition to his harmonica and vocal skills, Rick Estrin is a songwriter of unparalleled talent. Critics have compared him to Cab Calloway, Louis Jordan and Willie Dixon. Blues Revue declared, “Estrin has created some of the finest blues songs of any artist on the planet. His carefully wrought lyrics penetrate human weakness with the precision of a boxer, though more often than not, he chooses to leave you laughing after the blow’s been struck.”

Estrin won the 1993 Blues Music Award for his composition “My Next Ex-Wife” and has written songs for a growing legion of famous fans. Three of his songs found their way onto Grammy-nominated albums: “Don’t Put Your Hands On Me” (on Koko Taylor’s Force Of Nature), “I’m Just Lucky That Way” (on Robert Cray’s Shame + A Sin), and “Homely Girl” (on John Hammond’s Trouble No More). Other artists who have covered Estrin songs include Saffire—The Uppity Blues Women, Little Milton, Rusty Zinn, Kid Ramos and Mark Hummel. “I like songs that tell stories,” Rick says, “songs that are well-crafted and meaningful.” Along with Dixon and Leiber and Stoller, Estrin cites Sonny Boy Williamson II, Percy Mayfield and Baby Boy Warren as his major songwriting influences. Billboard noted that Rick writes “fabulous, remarkable original material.”

Besides Estrin’s songwriting and musical skills, he is among the most entertaining and colorful showmen around. His quick wit and his signature look—coifed hair, pencil-thin mustache and sharp attire—add even more color to his performances. “People don’t go out to see people who look like themselves,” says Rick. “They want to see something special. I was schooled in this business to be a showman, and that’s what you get when you come to see me perform.”

Estrin was born in San Francisco, California in 1949, and grew up following his own path. He discovered an entirely new lifestyle when, as a 10-year-old boy, he made his way to the tough Market Street area and befriended many of the neighborhood characters. He discovered another new world when his older sister gave him a copy of Ray Charles’ The Genius Sings The Blues when he was 12. Albums from Jimmy Reed, Champion Jack Dupree, Mose Allison, Nina Simone and others soon followed. By the time he was a teenager, Estrin had completely identified with the urban, African American culture surrounding him.

Rick got his first harmonica at age 15, and by age 18 was proficient enough to begin sitting in at black clubs around the city. He first jammed with blues master Lowell Fulson and almost immediately was hired to open five shows for Z.Z. Hill. He worked five nights a week for almost a year with guitar legend Travis Phillips in a band fronted by famed pimp/bluesman Fillmore Slim (who was the centerpiece of the acclaimed Hughes Brothers documentary American Pimp). Phillips introduced Estrin to Rodger Collins, the man who would become Rick’s first real musical mentor, and who schooled Rick on the finer points of songwriting and show business. He moved to Chicago and worked with Johnny Young, Eddie Taylor, Sam Lay and Johnny Littlejohn before meeting and jamming with Muddy Waters. In fact, Muddy wanted Estrin to go on the road with him, but due to nothing more than a missed phone call, it never happened.

Because of that missed connection, Rick eventually moved back to the Bay Area, met Little Charlie Baty and formed Little Charlie & The Nightcats. For the next 30 years, the band barnstormed around the globe, honing their skills and entertaining countless people. Now, as Rick Estrin & The Nightcats release Twisted and tour the country, they’ll bring their raucous, rocking blues to fans both old and new. Clubs will be packed, dance floors will be filled and a guaranteed great time will be had by all.

The Nightcats:
J. Hansen (drums)
J. Hansen was born in Joliet, Illinois in 1972. He began playing drums at a very early age and performed his first gig at 13. He began his musical career drumming with Dixieland bands and played traditional jazz with classic jazz multi-instrumentalist Clint Baker. While studying music in college, J. began working in local Bay Area blues bands and writing songs for his own R&B/funk band, Verso. In 1998, J. toured California and recorded a CD with the Preservation Hall Jazz Band’s longtime tenor banjo player, Narvin Kimball. J. then began playing with the well-known swing band Steve Lucky and the Rhumba Bums, with whom he toured and recorded a CD. Hansen joined The Nightcats in 2002.

Lorenzo Farrell (bass)
Lorenzo Farrell was born in Lexington, Kentucky in 1976. He grew up in the fertile music scene around Bloomington, Indiana, absorbing rock radio of the 1980s. Starting at age five, Farrell studied classical piano and later picked up the guitar. During his high school years in Berkeley, California, Lorenzo discovered jazz and made the switch from piano to acoustic bass. He played jazz all through high school and college. Farrell joined J. Hansen in the San Francisco group Steve Lucky and the Rhumba Bums in 2000. He re-joined Hansen in 2003 when he was recruited into The Nightcats.

Kid Andersen (guitar)
Chris “Kid” Andersen was born in Telemark, Norway in 1980. A blues fan since childhood, Andersen fell in love with the the music of Lightnin’ Hopkins, Junior Watson, and the Kings (B.B., Albert and Freddie). By the time he was 18, Kid was backing all the American blues stars who came through Norway, including Homesick James, Nappy Brown and Willie “Big Eyes” Smith. He moved to California at age 20, and released four solo albums before joining blues harmonica legend Charlie Musselwhite’s band in 2004, a gig that lasted until Kid joined Rick Estrin & The Nightcats.