Emerson & Waldron - The Best Of 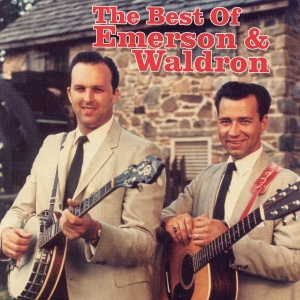 Bill Emerson & Cliff Waldron were a key link in the early development of contemporary Bluegrass music and this album captures the very best material from their three highly influential early Rebel LPs, plus five songs never before issued. Bringing songs from new sources into mainstream Bluegrass, Emerson & Waldron were hailed for introducing the now standard "Fox on the Run," along with "Proud Mary," "If I Were a Carpenter" and other songs. They were equally adept at projecting classic hard-core traditional Bluegrass pieces like the Stanley Brothers' powerful "Our Darling's Gone" and "A Lonesome Night."

Bill Emerson, who had been an original member of the Country Gentlemen (and who would later rejoin them) joined up with West Virginia singer Cliff Waldron and Ed Ferris, another who put in several years with the Country Gentlemen and fiddler Bill Poffinberger to form the first Emerson & Waldron band for their debut album New Shades Of Grass. By the time of their second album they were featuring Mike Auldridge on Dobro, whose smooth and tasteful playing gave the group a highly distinctive sound. They were joined on many of their recordings by John Duffey, who had retired from the Country Gentlemen and was running an instrument repair shop in Alexandria, VA. Auldrige, Duffey and Tom Gray (who also played some bass for Emerson & Waldron), of course, went on to form the Seldom Scene a short time later.

All three of these Washington, D.C. based bands - the Country Gentlemen, Emerson & Waldron and the Seldom Scene played a great part in introducing Bluegrass music to an essentially new young audience - both urban and rural. Though all were known for their innovations and experimenting with different material, perhaps equally important was the fact that they all could and did play some powerful, traditional Bluegrass as well, making sure that future audiences carried a full measure of respect for the great masters of Bluegrass music's first generation.
5
What's This
Advertisement