Easter Brothers - They're Holding Up The Ladder 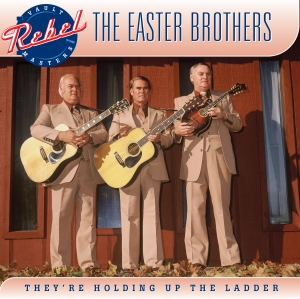 
The Easter Brothers have been mainstays in bluegrass and gospel music for over 60 years! The Mt. Airy, North Carolina, natives organized their group in 1951 and have been going non-stop ever since. The core of the band has always consisted of three brothers: James, Russell, and the late Edd Easter. Over the years, they have been augmented by a host of excellent pickers, many of which have been children of the original trio. Early in their career, the Easter Brothers benefited from a friendship with bluegrass legends Don Reno & Red Smiley. The duo, and their manager Carlton Haney, facilitated the signing of the Easter Brothers to one of the major independent recording companies of the day and even helped with the recording of their first session.

When the Easter Brothers landed at Rebel in 1980, they had been making music professionally for nearly 30 years. They often straddled the line between bluegrass and traditional southern gospel. To the delight of their many bluegrass fans, the Rebel sessions were pure bluegrass. I Feel Like Traveling On highlighted the trio harmonies of James, Russell, and Edd. By now, they were content to let the younger members of the group carry the instrumental load and banjoist Russell Easter, Jr., bass player Roger Easter, and guitarist Bobby Easter along with fiddler Jimmy Edmonds are all heard to good effect on this recording. The album featured what has become one of their most enduring songs, “They’re Holding Up the Ladder.” The remaining material was evenly divided between other Easter Brothers originals and time-honored favorites like “I Saw the Light,” “Crying Holy Unto the Lord,” and “Pass Me Not.”

The group returned in 1982 with another album called Almost Home. It followed the successful formula of their earlier Rebel release: fine trio singing by the Easter Brothers with bluegrass backing. Standout performances included “My Lord Will Send a Moses” – a song that was popularized earlier by the Singing Cookes, the Jim Eanes favorite “In His Arms I’m Not Afraid,” Reno & Smiley’s “I’m Building a Mansion,” and “White Winged Angel.”

The third Easter Brothers release on Rebel was a reissue of some of their very first recordings. Eleven songs made up the album entitled Early Sessions, all of which were Easter Brothers originals. All the songs are excellent examples of bluegrass gospel music at its best. One track, “The Darkest Hour,” was a favorite of Elvis Presley.

In 1985, the Easter Brothers released their last studio recording for Rebel. In honor of their long-time friends, it was called Tribute to Reno & Smiley. In their notes to the album, James, Russell, and Edd recounted their friendship with Don and Red and recalled how the duo went above and beyond the call of duty to help them launch their own careers. When he learned of the album, Don Reno commented, “I’m glad you boys did it, because I know it’s done right!” One reviewer noted, “… these guys sing from the heart, with passion and commitment… [it’s] solid, no-frills traditional bluegrass gospel performed with a maximum of country soul and a minimum of pretension.” It’s an excellent summation of not only this album but their entire career.

This compilation is a collection of choice tracks from the Easter Brothers now out of print Rebel releases.
2
What's This
Advertisement