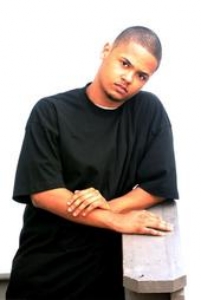 Its not often that you meet a Hip Hop producer that did not listen to hip hop or jazz at one time. "I didnt start listening to hip hop till I was around 11-12. All I used to listen to was rock". But for Epik, a rapper named Jay-Z changed that."I think it was Nigga What that hit me". After moving from place to place he finally ended up in the entertainment capitol of Los Angeles. "I had just met my Pops and was in a whole new environment, but this is where it started". After moving back and forth between his Mother and Father, he settled in Los Angeles and attended Alexander Hamilton High for the performing arts. This is where he jump started his musical mind.

His father introduced him to Randy Thomas, who owns a recording studio. From there he met Ricc-Rude (acclaimed producer of Destiny Childs "Cater 2 U") who unknowingly had a tremendous influence on him. With the lack of funding and support for his passion of music, it took 2 years to find something affordable. "One day I was on the internet at school looking for programs for music production and this dude that never talks comes behind me and asks me if I was interested in production and gave me a disk called fruity loops. From there everything clicked". Despite the lack of respect for the program, it seems that Epik pulls every string in it to make it work. Rapper Rosevelt says "When I first met him and he said he uses fruity loops I already had a good idea he was wack". But Epiks west coast sound, hard hitting drums and stacked delayed claps caught his ear. "Hes like Dre, Blaze and Hi-tek put together". But Epik wants everyone to know, "I dont just do west coast". After Epik found his music was good enough, he went back to the studio to work as an engineer. Working alongside Ricc-Rude and another producer named T.H.X., who also used fruity loops, Epik says "When I first heard how crazy his (T.H.X.) tracks were I knew I could do the same". He also says "Coming up under them was a blessing because thats where I collected a lot of my sound from".

Now Epik is doing his own thing. He plans on opening a studio and jump starting his production label, Dynamic Records. He's now working on the GrindMode album which consists of rappers Rosevelt, Casino, Littles, and Fanatic. Epik says, "Its a whole movement and I love the fact that I have a chance to help create the sound". So watch out for this dude hes only 16, na hes 21.