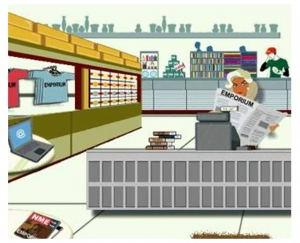 BIOGRAPHY
The unique sound of EMPORIUM was brought together in January 1998 when work commenced on their first album of home recordings A FINE FINE LINE, released on PEOPLESOUND the following year.

Formed in Edinburgh originally as a 3-piece, Emporium chose to remain studio based for much of the next 4 years, performing just a short series of gigs in the summer of ' 98. Around this time the song SLEEPING DOGS was receiving acclaim from radio in Scotland and indeed reached the year-end top 10 songs on BBC SCOTLAND's BEAT PATROL show, as published in NME the following January. Together with a 5-star review in GUITARIST magazine for HAPPY HIGH e.p (and cover cd), the hard work was paying off....

Over the next 18 months many songs from their debut collection were given airplay including DREAM DAY, ZOMBIE, and the 2nd ltd edition single ELEVATE which was a collaboration with FREDDIE PHILLIPS, best known for his work on the 1960's TRUMPTONSHIRE t.v programmes.

By the new millenium Emporium had notched up 17 radio plays including ZOMBIE on STEVE WRIGHT show (BBC WORLD SERVICE) and HAPPY HIGH on EVENING SESSION in Scotland (BBC RADIO ONE). A second batch of songs was completed in 2000 for the album ITS THE THOUGHT THAT GETS YOU HIGH including SALISBURY PLAIN , NO WAY OUT, and their first nationally distributed single EMAIL EDDIE, released on the band's own label and distributed in the Uk by Pinnacle/Shellshock on January 22nd 2001. This was followed on July 30th by the single LISA ON THE SCREEN which was airplayed in Germany, Uk, Holland, and America where it was also given a glowing review in Boston's Music Business Monthly.

The release of HALLUCINATIONS (11 track collection) on April 1st 2002 brought further positive feedback from various media, and scored ALBUM OF THE MONTH on POPSCENE (Netherlands) and PLANETE INDIE (Belgium) , where it was also ranked 3rd best album of the year from the 11 nominated albums. A single 'Sixes and Sevens' appeared the following October.

In 2003 Emporium were awarded a Scottish Arts Council Grant towards the recording of a forthcoming album. The new album 'Silver Brainwaves'(13 tracks) was released on October 10th 2005, and was preceded by a vinyl single 'Wasted' on June 27th. The single was eventually given a digital release via Itunes on May 15th 2006.

On April 2nd 2007, a remix of 'Dice Man' featured on the 21 track Whimsical compilation 'Elevate'.