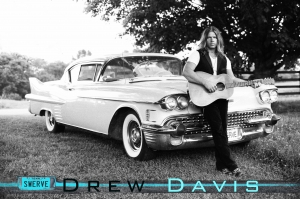 “Iʼve just seen the best live act ever.” Thatʼs a mouthful, coming from two-time Entertainer of the Year, Neal McCoy, just after he heard Drew Davis soundcheck as an opening act.

Davis was born and raised fifty miles south of Kansas City, in a small rural town called Peculiar, Missouri. Davis grew up performing in church, and sang in any honky-tonk that would let him in the door. While attending college at Southwest Missouri State, Drew landed a job as the lead singer at Lowes' Branson Town Theatre, which gave him many opportunities and surrounded him with some of Country music's greatest legends including Roy Clark, Johnny Lee, and many others. His talents led him west to Los Angeles, California where he united with some of LA's finest musicians and songwriters to develop his own distinctive sound before returning home to draw inspiration from his mid-western roots. Davis now Lives in Nashville, Tennessee currently finishing his summer release of his forthcoming album

With performances nationwide including some of the biggest fairs and festivals like Country Thunder and Country Stampede, Davisʼ fan-base has grown exponentially over the course of the 700 shows. Davis has performed sharing the stage with acts like Rascal Flatts, Keith Urban, Brooks & Dunn, Dierks Bentley, Luke Bryan, Trace Adkins, and many other country music giants quickly earning him recognition nationwide as one of the hottest new acts in country music.

Call it “road-tested country,” Davisʼ Midwest-twang is the product of talent, passion, and grit. His songwriting skills are strong enough to have won him a deal with UNIVERSAL Music Publishing and legendary management gurus, McGhee Entertainment, who spiked the careers of acts such as country chart-toppers
Darius Rucker, Chris Cagle, Jana Kramer, and Rodney Atkins, along with rock legends KISS, Bon Jovi, Motley Crue, and Hootie & The Blowfish. After witnessing one performance, whaling on stage, itʼs easy to see why McGhee and Universal quickly signed him—recognizing Davisʼ down-home groove.
With a background stemming deep in rural Missouri, one often wonders how Davis emerged onto the national music scene. His roots can trace to one defining moment over five years ago when he quickly ascended into the limelight winning the Colgate Country Showdown. When Davisʼ name was announced as the top talent in the country, he joined country greats Martina McBride, Garth Brooks, and even Neal McCoy with the title of Colgate Finalist. Since, Davis has been embraced by country radio, both CMT and GAC, along with networks like A&E who featured an episode of Gene Simmonʼs Family Jewels dedicating an entire episode to Davis and Simmons working on Davisʼ forthcoming music for his 2014 release.

Davisʼ music and live performance is stronger than ever and his possibilities even more unlimited. With hundreds of performances under his belt and a strong fan base, Davis is still traveling down that road, aimed somewhere far past the horizon with the wind at his back, and heʼs jamming into high gear. Itʼs clear: Drew Davis is on this ride for the long haul.

X-factor winner Tate Stevens National release of Holler If Your With Me. #4 on Billboard Charts Country Albums Sold