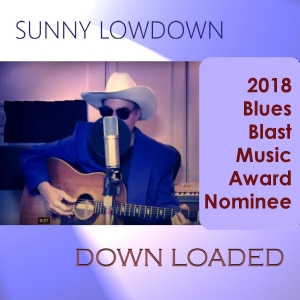 “Every time I listen to this album I like it even more. It’s a real sleeper … you have to seek it out.” - Rhythm Highways, KDHX St. Louis

This release is a follow up to Sunny's first release, "The Blues Volume Low", and has a lot more of his own material on it. Sunny says "I tried to capture the sparseness and spooky quality of my favorite Americana and blues songs. I say just enough and no more - leave the listener hanging a bit."

This is a bachelor's nightmare during the days before his wedding. The tune has a loping feel like a ship on the ocean, heading for stormy seas. The lyrics are filled with boating double entendres. I wrote this very quickly during a moment of panic about a real relationship.

I wrote this tune while watching two young kids on a date in the mall. I first played it live for a club full of teenagers. They were staring at their cell phones for about 30 seconds into the song, then suddenly realized what I was singing and started laughing. They were very tentative about picking up their cell phones afterwards, but of course they did. One kid came over to me and said "you must be old to be commenting on cell phones." I said "Maybe, but I saw you laughing." It's one of my most popular tunes -- when I sell CDs at shows people always ask me for "the one with 'Texting Blues'".

This is sex posing as Internet terminology. The words "download", "stream", "broadband", and "playlist" are all used to tell the story of a man whose girl is two-timing him. "She's been working a new playlist, out in another neighborhood". The guitar style draws from Big Joe Williams, who was one of the first blues guitarists I saw play in person. Williams purposely strung his guitar with nine strings, giving it eerie African sounding overtones that could haunt your mind for days after listening to him. I used a weirdly strung guitar on this tune.

This is one of my favorite tunes on "Down Loaded" because it says a lot with very few words. I wrote it while I was sitting on a park bench watching some kids play. I saw a woman who looked like a grown version of a girl I'd known as a teenager, and she had her little girl on her knee -- they were laughing. So I invented a whole story about us having been lovers a long time ago, now she's married with her kid, and the blue feelings I might have about having let her go. The melody goes back to some old Folkways and RBF recordings that I used to listen to when I first started playing. It's kind of a melding of many folk and traditional melodies.

I wanted to wrap up the release with this -- that's why it's called "That's Enough". I just wanted to let go and play some guitar, so that's what I did. The drums are steady driving, but a bit wacky because they are slightly behind the beat. It gives the tune a slippery sound, and my hat is off to the drummer, Sunny Tubs, for that.

Leaving a girl once again for the dusty open road. The singer yearns to hear the words "I love you" from a girl he's only just met and spent the night with, to fill his emptiness as he hops the next train out of town at dawn.

7. I Had My Trouble (3:35)
Songwriter(s): Traditional
Publisher(s): Public Domain

I heard a version of this by J.B. Lenoir. The guitar and voice speak back and forth to each other, and in unison. It's a beautiful, sad tune.

This is Li'l Son Jackson's tune. I love his style, and I play this tune close to that style. It has an urgency to it that really gets to me. When I sing it, I am that gambler, telling the world all the trouble I got myself into.

This is one of my favorite Lightnin' Hopkins tunes. He's down, but he's warning the woman who did it to him that some day she'll be worrying too. I love the attitude, and I play the guitar to match the attitude. There's a mix of Hopkins' and my own guitar styles in this.

This is a bit like "Rollin' And Tumblin'", but I hear it a little more distant and subdued. The girl's parents want nothing to do with me.

There's an old tune with this same title, but this is different.

You never can tell has two meanings:
You can't tell what a person's like from looking at them. The man driving a Cadillac could be living in a one room shack.

You can't tell anybody about your back door cheating. Nope. You never can tell. In this song, the woman's baby's father is the back door man, but nobody will tell. She certainly won't, so he doesn't know.


Slim Harpo had a hit with this tune. I play it a little less laid back than he did, and I'm playing harp on this tune in a rack while playing guitar. It's the first time I've played harp on a recording. I like the uneven verses and the story of this tune.

Before acquiring the nickname "Sunny Lowdown", Sunny had achieved renown as Louie X. Erlanger, guitarist for the group Mink DeVille, during which time Mick Jagger had called him one of his favorite guitarists.

After seven years recording and touring with Mink DeVille and sharing stages with Patti Smith, Tom Petty, Elvis Costello, The Cars, Blondie, Talking Heads and others, Sunny went back to his roots (Sunny's first professional gig had been at the age of sixteen backing up John Lee Hooker) and proceeded to work with many of his favorite blues and R&B artists, including Otis Rush, CeDell Davis, Pinetop Perkins, Hubert Sumlin, Big Jay McNeeley, Wild Child Butler and more. He also toured with and produced recordings by Mississippi Hill Country blues singer R.L. Burnside, one of which was nominated for a W.C. Handy award.

In 2005 Sunny started working with his own four piece group under the monicker Sunny Lowdown, while also playing solo electric country blues at clubs, farmers markets and house parties around New England. His first release under the name Sunny Lowdown, "The Blues Volume Low", received great reviews and was selected as "Blues CD Of The Year" by Spokane Public Radio. It led to a more active touring schedule for Sunny.

On "Down Loaded", backing himself up with fine, muscular picking, Sunny continues the tradition he began with his critically acclaimed first CD. Down Loaded contains seven tracks penned by Sunny, and five tracks penned by some of his favorite blues singers, including Li'l Son Jackson, J.B. Lenoir, and Lightnin' Hopkins. Sunny's tunes range from "Texting Blues", about a couple who can't sustain a conversation, to the aching longing of "A Girl I Once Knew", to the toe tapping swing of the instrumental "That's Enough". It is soulful, heartfelt blues that one doesn't hear too often these days, the kind of blues that takes its time and only says what needs to be said -- not a word or note more.

"Calls to mind the quality and tone of some of the best old Texas and Mississippi blues pickers... Drive, spirit, spookiness – all the elements are here" – Elmore Magazine

"This one is made for listeners who relish real, traditional blues, served up by an artist who has learned from some of the greats."
– Blues Blast Magazine