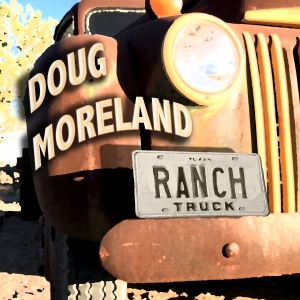 Click on any album title for more songs from Doug Moreland


DOUG MORELAND BIOGRAPHY
From the Fort Davis mountains in west Texas, Doug Moreland performs a fresh twist of Texas and Western swing music, with his original songwriting and his dandy band The Flying Armadillos.

Being the eldest son of a wainwright, blacksmith, and fiddle-playing ranch hand, Doug left Fort Davis TX at age 17 (1992) for a career in the music business. After a short stint in Ruidoso NM as a funny man in a dinner show, he then toured with various acts around the country as a fiddle sideman. During this time, he recognized his desire to front his own band and write his own songs, and also discovered the art of chainsaw carving, which all brought him from Nashville TN to Austin TX in late 1999. There he established a comedic, solo act with a singing dog as the finale, eventually progressing into a full dancehall band with his wit and charm playing right back into a familiar instrumentation of twin fiddles, upright bass fiddle, swing guitar, and minimal drums. Coming full circle, Doug now resides with his family in his hometown of Fort Davis TX and entertains the western portion of the state with his Barn Dance Band!

Doug appeared on The Tonight Show with Jay Leno in 2003 with his former companion Holly-peño (a black/white McNab dog). They appeared together on Animal Planet's Pet Star, as well as Ripley's Believe It Or Not! Doug has also made guest appearances in a handful of films, most notably the 2012 Richard Linklater film Bernie along with Jack Black and Shirley MacLaine.