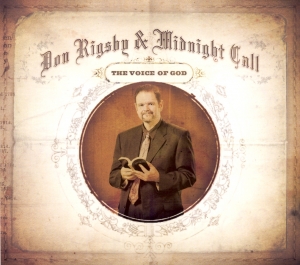 Eastern Kentucky native Don Rigsby has been a presence on the bluegrass scene for more than two decades, much of it as a mainstay on mandolin and tenor vocals for legendary acts like J.D. Crowe & The New South and the Lonesome River Band, as well as a driving force behind Bluegrass “supergroups” Longview and The Band of Ruhks. Add in a couple of solo albums, literally dozens of guest spots and production credits, and the inescapable conclusion is that Rigsby’s fingerprints are all over modern-day Bluegrass in one form or another. And if that weren’t enough to keep him busy, he was - until recently - the first ever full-time director of the Kentucky Center for Traditional Music at Morehead St. University.
The Voice of God, Don’s second release for Rebel, is not his first venture into Gospel music but it is his best. In its gem-like vocals, its suspenseful storytelling, its discomfiting truth-telling and its weaving of Anglo-Celtic-Appalachian and African-American influences, this new album is a measure of just how much he has matured as an artist. The Voice of God is not your typical Bluegrass Gospel record. Rather than featuring straight-ahead Bluegrass instrumentation, “polished” vocal arrangements and uplifting messages, it contains a fascinating blend of musical styles—from up-tempo traditional Bluegrass to African-American influenced five-part harmony singing to even a no-holds-barred Blues work-out between Don and noted Blues musician Rory Block. In addition, some of the project’s vividly drawn characters include a modern homeless tramp who carries his Bible in a Crown Royal bag, an ex-prostitute who can teach us the true meaning of Christianity and all those pretentious people we seem to know who wear their Christianity on their sleeves.