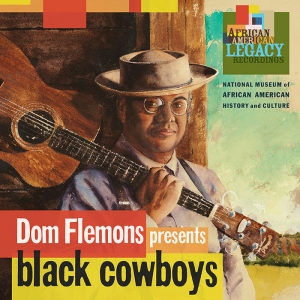 Dom Flemons Presents Black Cowboys pays tribute to the music, culture, and the complex history of the golden era of the Wild West. In this single volume of music, the first of its kind, Flemons explores and re-analyzes this important part of our American identity. The songs and poems features on the album take the listener on an illuminating journey from the trails to the rails of the Old West. This century-old story follows the footsteps of the thousands of African American pioneers who helped build the United States of America.

Dom Flemons is a Grammy Award winning musician, singer-songwriter, and slam poet. Carrying on the songster tradition, Flemons strives to mix traditional music forms with a contemporary approach, to create new sounds that will appeal to wider audiences. In his recent solo album Prospect Hill (2014), Flemons drew from a wide range of styles, including ragtime, Piedmont blues, spirituals, southern traditional music, string band music, fife and drum music, and jug-band music. He began his career as a performer in the Arizona music scene, where he produced 25 albums for singer-songwriters and slam poets in Pheonix. In 2005, Flemons co-found the Carolina Chocolate Drops, an African-American string band that won a Grammy for its 2010 album Genuine Negro Jig. Today, he tours throughout the United States and internationally as “The American Songster. In February 2016, Dom performed at Carnegie Hall for a Tribute to LeadBelly. In September 2016, Dom performed at the opening ceremonies for the National Musuem of African American History and Culture in Washington, DC. Dom has been touring internationally and has released his latest album called “Ever Popular Favourites” with British Guitar player, Martin Simpson. The album was released on Fledg’ling recordings in October 2016. Dom’s newest album to be released through Smithsonian Folkways will be celebrating the stories and songs of the black cowboys. Dom has released two instructional DVDs through Stefan Grossman’s Guitar Workshop. Dom has a new podcast called American Songster Radio and it is in conjunction with WUNC North Carolina Public Radio.
21
What's This
Advertisement