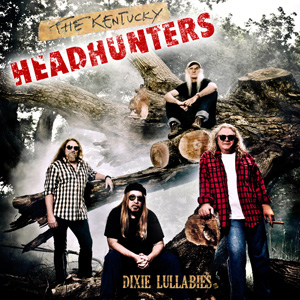 Two days after Christmas, The Kentucky HeadHunters rolled into their  “Practice House” near their home in Edmonton, a remote area in South Central Kentucky.  Built in the early 1900s, the house has no insulation, no running  water, and only two small  oil heaters inside.  And the snow was just beginning to fall.

Over the next 11 days, while Mother Nature continued to dump ice and snow across the Bluegrass State, The Kentucky HeadHunters recorded 14 new originals that would comprise their 12th release, Dixie Lullabies.

“There were 30-inch icicles hanging from the eaves on the front porch,” laughs guitarist Richard Young. “We invited some friends and neighbors to hang out and party and also create some body heat.  One night after a few beers, an old buddy said ‘It ain’t cold in here; the Heads are jammin’.’      Believe me - it was COLD!”

“Dixie Lullabies covers a vast territory,” Young continues, “from the way we were, the way we are and where we’re headed.
“It’s our first all originally-written studio album since 2003. Even though we tour constantly, as of late we’ve been feeling the earth move under our feet and something in the air that gave us the spirit  to write and record new albums — for our souls and anyone who cares to listen.”

Ray Waddell of Billboard Magazine once called the group  “the most consistent and durable Southern rock outfit on the planet.”

The Kentucky  HeadHunters have continued to blend sounds from a deep well of influences that includes Alternative, Blues, Country, English Rock, Rockabilly, Jazz, and, of course, Southern Rock.

The “Practice House” has been at the center of the band’s work since they began in 1968 as Itchy Brother.

After 20 years of playing the rock club circuit in the Midwest and The Deep South, the group survived the loss of multiple rock record deals brought on by  Presidential Elections, plane crashes, the death of a record executive and disco, but most of all, their ages.

The train hauling the heyday of Southern rock had come and gone. Itchy Brother never got to ride the train, but they never gave up.

By 1989, the band had morphed into The Kentucky HeadHunters when they came to the attention of Mercury Records Exec Harold Shedd.  “He called and said we might be cooking hamburgers next year, but we gotta do this,” Young recalls.

Mercury released the multi-platinum Pickin’ On Nashville later that year. “It blew up like an atom bomb and changed our lives forever,” Young says.

In the 20 years that followed, The Kentucky HeadHunters influenced countless artists and maintained a huge cult following by playing thousands of shows, all the while staying true to themselves.  Acclaimed rock band, Black Stone Cherry (which includes Richard Young’s son, John Fred Young) draws from the HeadHunters’ brand of rocket fuel as they carry their style of Southern Rock around the world today.

“Facts is facts,” wrote noted writer Holly Gleason in a recent column for No Depression. “The Kentucky HeadHunters are a great rock band, filtered through the British/blues-based rock and roll of the Yardbirds, The Who, Led Zeppelin, Cream, Frankie Miller, and Long John Baldry.  Twenty years after being the biggest thing there was, it appears the Kentucky HeadHunters are on the verge of being what they were meant to be: a slamming rock/roots band that fears no corner at any speed.  Like the old blues guys, they ain’t afraid to sweat or make it moan.  We should all take that lesson to heart.”