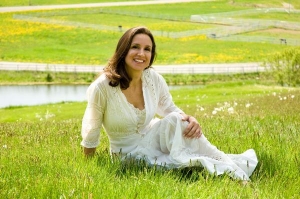 "Dianna Cristaldi (http://www.diannamusic.com) has a timeless voice that can be compared to that of Marianne Faithfull. Just when you think that country music has lost its pulse arrives Cristaldi to pump soul into the genre once again. Of course, this isn't commercial country; the corporate heads stateside have divided the genre into two categories - Young Country for the kids and pop refugees and Americana for the purists. Cristaldi actually occupies the space between the two. "

It started out as a healing modality, by accident several years ago after I had just come home from Massachusetts General Hospital after a long stay in the hospital. I was recovering from bile occlusion and acute pancreatitis. This was a particularly bad episode, as I had developed infection and necrosis of the head of the pancreas, compressed lungs. I was a hurtin’ puppy. My sister had driven me home from Boston. I’ll never forget the look of fear in my daughter’s eyes when they came outside to greet me. I was so skinny and frail and yellow. My daughters, young girls at the time, held me, like a baby and nursed me back to health for the next few months. I’ll never forget that first night when my youngest daughter, Bethany, came into my bed to sleep with me. It was early and much before her bedtime, but she wanted to be with me. She spooned her small frame against my even smaller, frail body, all the while stroking my head and face, she said with tears in her eyes and chokes in her throat “Mom, sometimes I wish you would just die so you didn’t have to suffer anymore. Me and Lea are strong and you know we’ll all always be together in spirit. You told us that and I know it is true”. It was one of the most tender, vulnerable moments I have ever had. My daughters teach me more about love and kindness then I could have ever learn in a a hundred lifetimes without them. Getting back to the music....during that period, I kept my guitar in my my bed with me. Literally slept with it day and night. While I was lying in bed, I would put the guitar on my abdomen and strum different chords, nothing special, just pulling at the strings to feel the vibration on my stomach. It helped me a lot. I was too sick for songs to emerge during that time, but the strength of that guitar was something else! I love that guitar, like another human being. It has a spirit all it’s own. All things do.

So I forge forward with this terribly expensive “hobby” that I cannot afford, and for which I feel great humility. When I write, I am humbled by the way things come to me, seemingly through my heart, but from a source unknown or through the mouths and hearts of others. I am humbled as I sing with my craggy old lady voice, sometimes asking God why I couldn’t have been given a better tuned, pretty sounding instrument to work with. I am always humbled when I have had the good fortune to work, sing, play, and frolick with musicians, that are not only moved by the spirit in a big way, but are also masters of their instruments. I can only dream of having such talent.

Every time I’m ready to throw in the towel, someone calls...a producer, a writer, a player, a friend....or I have a dream, and I am inspired, all over again. Each song, each piece, is an evolution in process, changing, growing, moving into whatever it is it’s destiny to be.