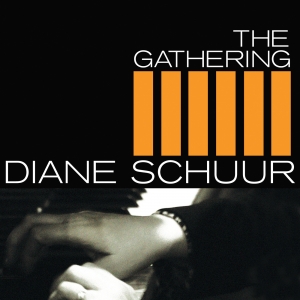 4.) Til I Can Make It On My Own
Tammy Wynette, Billy Sherrill, George Richey - EMI Algee; Universal - BMI

Since she first began recording, jazz legend Diane Schuur has had a dream. It is one she never got to achieve—until now. The singer wanted to record an album of classic country songs, those that inspired her when she was still a child. The singer has covered a lot of territory, collaborating with a range of artists from straight-ahead jazz trumpeter Maynard Ferguson and the swinging Count Basie Orchestra to the Latin-infused Caribbean Jazz Project to blues titan B.B. King and pop icon Stevie Wonder. She has received Grammy Awards, sold millions of albums and toured the world. But her roots were planted when she began listening to country music, and that’s where she wanted to go.

On The Gathering, her Vanguard Records debut, Deedles, as she’s fondly known to both friends and fans, turns a corner into a brand new lane, infusing her jazz sensibilities into ten country-brewed tunes from such seminal songwriters as Willie Nelson, Merle Haggard, Hank Cochran, Kris Kristofferson, Roger Miller and others. Recorded in Nashville in largely a one day-long session on December 6, 2010, Schuur is accompanied by a stellar Nashville backup band augmented by several all-star caliber guests, including vocalists Alison Krauss, Vince Gill and Carmella Ramsey; guitarists Mark Knopfler and Larry Carlton; and tenor saxophonist Kirk Whalum.

The Gathering allows Diane Schuur to embrace her country roots for the first time, really, as a recording artist. Even though she grew up weaned on the music of classic jazz vocalist Dinah Washington and others, Schuur’s first recording was the country single “Dear Mommy and Daddy,” produced by Jimmy Wakely. “I was in the 10th grade and I met Jimmy when my father took me to an audition,” says Schuur. “Jimmy said he wanted to record me, so I flew with my sister to Burbank [California], stayed at his home and recorded the song that was written by his daughter Linda. It went to No. 3 on the country charts. So The Gathering completes a full circle for me. I figured, if Ray Charles could record a country album with the inflections of blues and jazz and be successful, why can’t I?”

Even though the country seed had been planted, Schuur gravitated to jazz later in high school. “I was listening to the music of Duke Ellington and George Shearing, which I cut my teeth on,” she says. “George, in particular, was definitely a piano mentor.” In 1975, she auditioned for the Tonight Show orchestra leader Doc Severinson, which led to her association with the band’s drummer Ed Shaughnessy, who enlisted her to sing a gospel suite with his band at the Monterey Jazz Festival. Still a teenager, she turned heads and opened ears of musicians performing there including Stan Getz, who invited her to perform at a talent showcase at the White House. That eventually led to her debut album, Deedles, on GRP, in 1984. She went on to record several albums for GRP, Atlantic and Concord before signing with Vanguard Records.

“I resisted the idea of doing a country album,” Schuur says. “But, finally, a year ago, after watching the Country Music Association’s awards show on TV, I felt the time was right to return to that music.” She notes that in addition to jazz pianists, she was also influenced by country pianist Floyd Cramer, who was renowned for his Nashville session work with many musical greats, including Elvis Presley, Roy Orbison, Don Gibson, Patsy Cline and countless others.

At the same time Schuur decided she wanted to venture into country, Vanguard Records had contacted her


manager about signing the artist. That started the ball rolling. “The project was met with such enthusiasm,” she says. The core of the band for The Gathering consists of guitarist Steve Gibson, Wurlitzer player Mike Rojas, bassist Michael Rhodes and drummer Eddie Bayers, along with vibraphonist Eric Darken on seven of the 10 tracks. As for including the Wurlitzer and vibes on the album, Schuur says, “Producer Steve Buckingham thought these instruments would be cool to add, to give the band a '60s/'70s feel. And I love the vibes. George Shearing used the vibes, and, of course, I grew up listening to Lionel Hampton.” She pauses, and then adds: “And did you know that The Wizard of Oz has vibes in it? The vibes play in a down scale when Dorothy is waking from her dream at the end, repeating the line, ‘there’s no place like home.’”

The Gathering is a collection of hit country songs brought to life by Schuur’s unique jazz styling. “I get in my actress mode,” she says. “I was singing about heartbreak, and I needed to identify with that emotion. Of course, most of these songs I couldn’t have sung with total conviction when I was younger. But with life experience, you understand how it feels.” The album opens with the Hank Cochran song “Why Can’t He Be You,” a sad ballad delivered with heartfelt depth.

Schuur also delivers another Cochran tune, the slow, lyrical “Don’t Touch Me” sung with a lazy lope and featuring such lines as “Your heart is like a torch each time you touch me,” and “Don’t touch me if you don’t love me, sweetheart.” “Hank’s lyrics are so brilliant and so clever,” she says. “They’re right on the money. You really do have to have the emotion to carry them.” Krauss contributes backing vocals, of which Schuur says, “Alison’s voice is fabulous, and we’re a perfect match with harmonies.”

Two highlights that are imbued with jazzy flavoring include the Merle Haggard/Bonnie Owens song “Today I Started Loving You Again” (another hopeful song with Vince Gill on harmony vocals) and Willie Nelson’s gentle, easy-going “Healing Hands of Time” (with Carmella Ramsey on harmony vocals and Mark Knopfler adding the third guitar sound in the mix along with Gibson and Buckingham). As for the former, it features Larry Carlton, who opens the piece with George Benson-like voicings. “Larry starts off with this ‘On Broadway’ feel,” says Schuur. “Then later he follows me perfectly with my scatting part. It was so cool how we developed a call-and-response.”

The works of the late pioneering country music singer Tammy Wynette also figures prominently on two tunes: the sober “Til I Can Make It on My Own,” which she co-wrote and Wynette’s cover of the haunting yet hopeful “Til I Get It Right” (written by Red Lane and Larry Henley). “I had to put on the cloak of Tammy,” says Schuur. “I could hear the depth of feeling as she sang these songs. I never try to mimic, but believe me, I know Tammy was definitely channeling through me.”

Other tunes in the mix include Dallas Frazier’s heartsick “Beneath Still Waters” (Schuur credits Cramer’s piano style for her rendition), Roger Miller’s heartrending “When Two Worlds Collide” (“This is the perfect breakup song with brilliant lyrics,” says Schuur) and Kris Kristofferson’s gem “Nobody Wins”.

As for the Nelson number, contemporary jazz tenor saxophonist Kirk Whalum was brought in. “We ended up getting a Muscle Shoals type of vibe,” says Schurr. “Kirk really gets to stretch out on this number.”

With The Gathering, Diane Schuur feels the timing is right. “I needed another direction for my music,” she says. “This album was a natural fit for me. All the stars lined up, and nothing was forced. I waited a long time to do this kind of album. Those sessions in Nashville were a gathering of the spirits, and we got it right.”
9
What's This
Advertisement