Dexter Shaw And The Wolftones - Dexin' 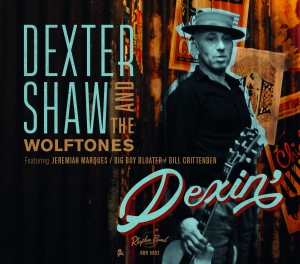 Dexter Shaw And The Wolftones - Dexin'
Dexter Shaw born In the 1950's in London He developed his love of blues and roots music, listening to his mother's Rhythm & Blues records. He got his first guitar at 11 and started busking on the street - playing in the "San Fancisco Bay" jug Band - outside pubs and working men's clubs with some school friends at 18 got a job as a sound engineer for Doctor Feelgood. After 10 years of touring, he picked up his guitar again and hooked up with his childhood friend Steve "West" Weston, who was playing the local gigs circuit. In the 1980's and 1990's he was some kind of a fixture in the buzzing London scene, playing double bass or guitar with some of the finest blues guys:, Big Joe Louis and His Blues Kings, King David Purdy, Jeremiah Marquez, Gordon Smith and Little George Sueref. He formed "Dexter Shaw & the Wolf Tones" in the late 1990's, before disappearing for many long years in rural France, away from the city living. He made his musical comeback last year and the current lineup, often includes his Daughter Francesca Shaw on double bass, Rob Pokorny on drums and Steve "West" Weston on harp. Dexter is now regularly playing in the UK and Continental Europe and he is considered one of the best out there playing that old school blues 1950's style. Check him out!

Dexter Shaw And The Wolftones
It is a welcome return to the uk and European blues scene for long time blues guitar player Dexter Shaw. A truly great classic, traditional blues player he paid his dues many moons ago with roots going back to doctor feelgood and in his own right a as a respected guitarist. He became known to many of us with his appearance and great chops on the London and uk blues scene ,he played along side many of the very finest uk blues musicians going on to form his very own fine band " Dexter Shaw and the Wolftones".
It is once again with his own new outfit that Dexter has returned, he is helped by his equally talented daughter Francesca shaw getting a big sound out of that upright bass, the highly rated Rob Porkorny on drums , and his old mucker from many a musical collaboration uk harp hero Steve West Western harmonica. I should say Dexter is a natural blues singer no affected or put on vocal. Just fitting his voice along side his driving guitar work . Dexter is from that hard study school of going in and taking something from many of the different styles ,he is at home playing not only that big sounding Classic R&B west coast style from the 40 and 50 but also getting lowdown and gritty with the Chicago blues and that early crunchy Memphis sound. With this latest release " Dexin " on Rhythm Bomb Records and a steady build up of dates we can be assured that blues are in good hands with Dexter and his wolftones . If you like real swinging rocking blues with feeling then get out there and see them when you can folks !
Sonny Burnett .
4
What's This
Advertisement