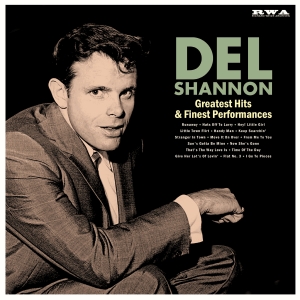 Del Shannon – Greatest Hits & Finest Performances
Del Shannon is known as the Runaway hitmaker of 1961, with a string of hits to follow in the early ’60s.
One story that may not be as well known is that he was the first American artist to record and release a Lennon/McCartney composition in From Me To You in the summer of 1963. Shannon’s version charted higher than The Beatles’ original on the U.S. charts that summer, a song that Shannon had produced himself! Del’s first attempt producing a session tasted sweet and he wanted to explore that opportunity more in depth. Del Shannon cut ties briefly with his managers in the latter half of ’63 and wrote, recorded, produced, and released his own records for a stint on his own label, albeit short-lived, BER-LEE RECORDS.
Two songs from those BER-LEE sessions never were released, until now!
Sourced from the original mono master tape, we proudly present Flat No. 3 by Shannon for the first time anywhere, a song that has sat in the can for over 50 years going unheard, and features Shannon singing to a Twisting beat, complete with a trumpet solo, something completely out of his repertoire.
The other composition is Give Her Lots Of Lovin’, heard here for the first time anywhere without Del’s harmonies. This song was later released as the B-side to Handy Man after harmonies were added and a stronger backbeat and percussion helped to thicken the sound.
This LP highlights Shannon’s other self-produced early sides along with a handful of his hits to keep things fun! Pick it up!


Del Shannon (born Charles Weedon Westover; December 30, 1934 – February 8, 1990) was an American rock and roll and country musician, and singer-songwriter who is best known for his 1961 No. 1 Billboard hit “Runaway”.
Westover was born in Grand Rapids, Michigan, and grew up in nearby Coopersville. He learned ukulele and guitar and listened to country and western music, including Hank Williams, Hank Snow, and Lefty Frizzell. He was drafted into the Army in 1954, and while in Germany played guitar in a band called “The Cool Flames”. When his service ended, he returned to Battle Creek, Michigan, and worked as a carpet salesman and as a truck driver in a furniture factory. He found part-time work as a rhythm guitarist in singer Doug DeMott’s group called “The Moonlight Ramblers”, working at the Hi-Lo Club.
When DeMott was fired in 1958, Westover took over as leader and singer, giving himself the name Charlie Johnson and renaming the band into The Big Little Show Band. In early 1959 he added keyboardist Max Crook, who played the Musitron (his own invention of an early synthesizer). Crook had made recordings, and he persuaded Ann Arbor disc jockey Ollie McLaughlin to hear the band. McLaughlin took the group’s demos to Harry Balk and Irving Micahnik of Talent Artists in Detroit. In July 1960, Westover and Crook signed to become recording artists and composers on the Bigtop label. Balk suggested Westover use a new name, and they came up with “Del Shannon”, combining Mark Shannon—a wrestling pseudonym used by a regular at the Hi-Lo Club—with Del, derived from the Cadillac Coupe de Ville, his favorite car.
source: wikipedia

Richard Weize Archives is exclusive distributed by H'art / Bertus. www.hart.de/home-en.html
Record dealers in the USA can get our releases directly from: www.allmediasupply.com and www.aent.com
8
What's This
Advertisement