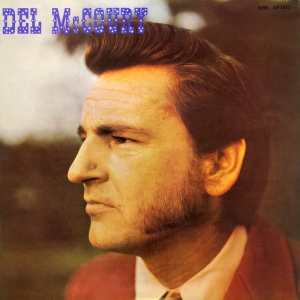 Before Del McCoury enjoyed status as one of THE eminent bluegrass musicians of the late 1990s and early 2000s, he built a career as a disciple of the high lonesome sound. It was the perfect vehicle for his high pitched, razor sharp vocals and riveting guitar work. He apprenticed under Bill Monroe in the middle 1960s and by the end of the decade had launched his own band, the Dixie Pals. By the middle 1970s, he had recorded four album projects for as many labels and came to the attention of Rebel Records.

Del had a solid group when he landed at Rebel. His Dixie Pals included Donnie Eldreth on mandolin, Bill Runkle on banjo, Bill Poffinberger on fiddle, and Dewey Renfro on bass. It was with this group that Del recorded his first two albums for Rebel. His self-titled 1975 debut introduced several several classics to his repertoire. Chief among them were two Ola Belle Reed compositions, “Springtime of Life” and “I’ve Endured.” Others included his take on a traditional ballad called “Rain and Snow” as well as two of his own compositions, “Loggin’ Man” and “Rain Please Go Away.” Taken as a whole, the Rebel output of Del McCoury and the Dixie Pals represents exciting listening and documents an important segment of one of bluegrass music’s most dynamic and visible performers.