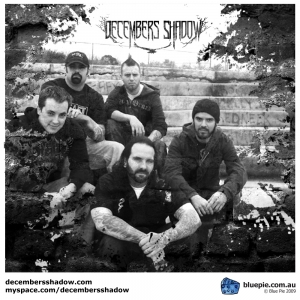 December's Shadow are a hard hitting 5 piece Hardcore / Thrash / Rock band hailing from Orlando, Florida signed to Blue Pie Records Australia. They play it loud and hard. As the band says "We had only one thing in mind when we formed in the Winter of 07," Says front man Joey Cusmano , "To redefine the face of Rock and roll music".

And when it comes to the music they prove their point. Incorporating the fast no holds barred philosophy of heavy hitting music and electrifying shows, December’s Shadow follows the footsteps of the American hardcore punk revolution of the late 70’s, presenting the world with a fresh brand of sincerity.

But don’t just take our word for it. Here is a taste of what the critics are saying:

“December’s Shadow- The Hands of Fate - a nice mix of the fast and furious with melodic choir boy antics, but they look like such “nice” boys - Oh, sweet ecstasy as they thrash-metal my world away into the next decade. Great production – this is a superb album get it while it’s hot…” Starr Tucker New York Waste

“December’s Shadow is one of the most intense live performances I have ever seen. These guys take it to the next level. We look forward to working with them in the future.” Mike Duvall Music Source

December's Shadow debut EP serves to establish the band as legitimate contributors to the modern thrash style. The Hands of Fate will certainly appeal to fans of bands like Scar Symmetry and Alexisonfire. Dave Knoch Lexington Heavy Metal Examiner.