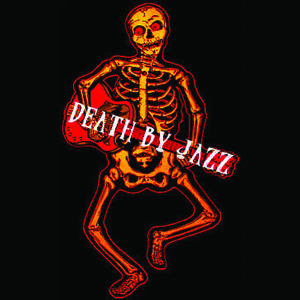 began as a solo project started by composer Tom Infande. An album concept was formed and Tom was joined by Solfunkshun aka Cliff Smith on bass and Jeff Larcher on drums and percussion. The trio then set out to write a new album together as the Death by Jazz trio. The musicians all met through the Music Production program at Valencia Community College and Flat Foot Records. Tom wrote most of the first material performing on drums, bass, and guitar on different songs. Cliff joined up with Tom after the two of them had been in a previous band and decided to begin working on music together. Tom discovered Jeff at a recording session and brought him in as the drummer. Tom's guitar performances have been influenced by jazz, funk, rock, and fusion musicians. Solfunkshun being influenced by funk and jazz. Jeff's influences have been modern rock, jazz and funk. All have an influence from classic horror movies adding that sort of element into the theme of the songs in the first album.

Death by Jazz's first album was an EP constructed of tracks written by Tom Infande.
The title of the EP is "They Wont Stay Dead" which is available on cd, as well as for download on Itunes and Amazon MP3.com.
The album's influence was of course improvisational jazz grooves and horror films.
DEATH BY JAZZ on Amazon Mp3.com

is the newest release under the Death by Jazz name. It was written and composed by Tom Infande and is a jazzy psychedelic journey down the rabbit hole. It was composed originally as a soundtrack to the NAO Dance Studio's performance of "Alice Takes Wonderland" performed in Orlando FL in 2008.

Death by Jazz has been writing new music and have been performing in Orlando and surrounding areas. They have been recording at Flat Foot Records in Orlando Florida. They look to release a full length album this year (2009) titled "ShapeShifter". Look for them at a venue near you!
If you like to groove and jazzy jam music gets you going, you will dig this!