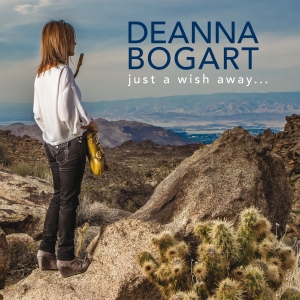 Deanna Bogart, the award-winning, multi-instrumentalist known for her vast musical range, broadens her horizons even more on "Just A Wish Away ..." Her newest Blind Pig Records release finds Deanna in territory that is at once unfamiliar and intriguing, intimate and provocative. She invites us on her own personal and musical transitional journey that's taken her in a single year from the Chesapeake Bay to Nashville, and from the high desert of Southern California to deep in the Louisiana bayou, where this CD was recorded.

"Just A Wish Away ..." features some of Deanna's strongest songwriting to date, artfully evoking the excitement of new possibilities tinged at times with a hint of wistful melancholy at what is left behind. From the locomotion of "If It's Gonna Be Like This" to the tender and surprising "Back and Forth Kid" to the sultry, horn-driven "Collarbone," Bogart's signature cut-above songwriting demonstrates the diverse dialects of her musical fluency.