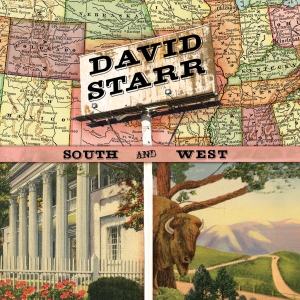 The Gratitude
Thanks to Cindy, my wonderful Arkansas family and my friends in Cedaredge, Nashville, and all points in between for their support. Thanks to my co-writers for their generous contributions. Thanks to Richlynn Group for their direction. Thanks to Linda Marks for her vision. Thanks to Johnn Oates for his confirmed inspiration.

The Dedication
Dedicated to OZZY the Road Dog, for he traveled both South and West

3. Maybe You're Not The One (2:58)
David Starr and Robby Hecht / David Starr Music, ASCAP and Old Man Music, SESAC

Beauty And Ruin, Starr’s latest project is a musical and literary adventure, produced and arranged by John Oates and co-produced by himself and David Kalmusky. It is a collection of songs inspired by Of What Was, Nothing Is Left, a novel written by his grandfather in 1972, which Starr plans to re-publish. “It is like watching a movie,” says Oates. "The cinematic aural landscape visually evokes a classic tale of tragedy, love gone wrong and an exploration of human nature and all its flaws." Beauty and Ruin is set for release in early 2020.

“A collection of beautiful, poetic and somewhat sad songs with a warm and organic production that draws you in and wraps around your heart,” writes Americana Highways of Starr’s 2018 record, South and West. The record follows an acclaimed EP, The Head and Heart, also produced by John Oates and the full-length Love and Sabotage with special guests like John Oates, Richie Furay, Dana Cooper and Steve Cropper.

Starr’s prestige extends beyond the stage as well, having launched Starr’s Guitars in Little Rock in 1998, then relocating to Cedaredge in 2001. Today, the store is such an institution that Cedaredge proclaimed the musician’s birthday as David Starr Day in 2016. He was also instrumental in the 2018 opening of the Grand Mesa Arts Center, an intimate event space brought to fruition through strong community support in Cedaredge, CO. Starr helped design the space in order to attract musicians and visual artists to Southwestern Colorado.

Starr says of his upcoming Beauty And Ruin project, “This project is important to me for several reasons. There’s the family connection through my grandfather’s book, the songs that were born out of his story and the intense collaborative nature of the whole project. I can’t wait to share it with the world
14
What's This
Advertisement