David Olney - When The Deal Goes Down 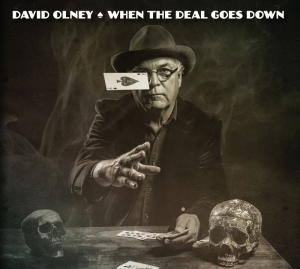 ""Olney is a TALENTED MUSICAL ENIGMA, and he is unquestionably a founding father of Americana music." http://bit.ly/VGnTyB
( The Nashville Scene COVER Story - Nashville, TN )


“BE ADVISED NOT TO SETTLE for a CURSORY LISTEN; this is, after all, an effort that provides potential for REPEATED REVELATIONS each time out. It's a reflection of Olney's special pedigree that he's not only able to pull all these INTRIGUING IDEAS together, but also make the MELODIES SO MEMORABLE in the process.”
( Country Standard Time )


"A former running bud of Townes van Zandt, Olney plays and sings like he'll cut you if you don't get it. His new album, 'When the Deal Goes Down,' has more edge than a straight razor and cuts just as deep. If you're into music for good news, fairy tales, cotton candy or dance beats, move on. Your life is in danger here."
( Houston Press )

DAVID OLNEY - "When The Deal Goes Down"

On the front cover of singer/songwriter David Olney's new studio album, When the Deal Goes Down, a stone-faced Olney deals you an ace of spades, the mythical Death Card. A similar photo sits inside, but in that one he smiles wryly as cards fly crazily around him. The counterpoint is apt: The music inside mirrors those contrasting faces.

From comedy (“Mister Stay At Home,” “Servant, Job”) to tragedy (“No Trace,” “Scarecrow Man”), the new album features Olney’s trademark dramatics, convincingly covering both the bitingly funny and chillingly stark sides of the street -- and doing a fair bit of jaywalking in between them, too.

When the Deal Goes Down (Deadbeet Records, July 2014), produced by Olney and bluesman Mark Robinson with associate producer Daniel Seymour and a complementary cast of players, cuts a wide swath across the roots music landscape, from raucous rock “When The Deal Goes Down,” “Big Blue Hole”) to whisper-soft folk (“Little Bird”). Olney lauds the willingness of all involved to embrace the unusual. Or as he says, “You can never get enough tuba.”

Or enough Shakespeare, apparently. Not only will Olney play Lord Amiens for the Nashville Shakespeare Festival in this summer’s As You Like It (a production for which he’s written new music), he also riffs on Hamlet in the new album’s photography, and includes an original Shakespeare-inspired sonnet in the package.

“If I were a poet, I’d want to write sonnets,” says Olney, who in fact recently filled a notebook with them. “I appreciate a good structure. In songs, the melody and rhythm act as an editor, throwing out the extraneous stuff. Sonnets seem really close to that to me.”

In his twenties, Olney left his native Rhode Island for the South -- where the music he loved was made -- settling in Nashville in 1973. His songs found favor with Music Row publishers and resulted in several songwriting deals, but commercial success was elusive. Ultimately that was a good thing.

“Anonymity allowed me to follow my muse,” says Olney. He tells a story of a long-ago night at Nashville’s Bluebird Cafe. “Inspired” by the safe and shallow hits sung by their composers, he went home and wrote “Titanic,” spinning a chillingly lusty love story from the iceberg’s point of view.

Olney spent the early ‘80s fronting his band the X-Rays, channeling the side of himself he calls “the rock ‘n roll animal” and landing a 1982 slot on Austin City Limits. But he was writing a lot more than rock songs and, seeking an outlet for his full range of expression, he released 1986’s Eye of the Storm (Philo/Rounder), his first solo album.

Things started to click. Olney’s next Philo/Rounder album -- 1988’s Deeper Well -- generated big ripples: over half its songs were recorded by others, including Emmylou Harris’ covers of both “Jerusalem Tomorrow” and the title track, and Linda Ronstadt’s version of “Women Across the River.” He had found his niche, and the series of critically acclaimed solo albums that ensued continues today.

But his recordings are only half the story, because it’s in performance -- whether solo, as a duo with the brilliant and versatile Sergio Webb, or with full band -- that the globetrotting Olney shines brightest. As the Bard said, “The play’s the thing.”

“I’ve always been aware that this is show business,” he notes. “I needed to be doing something to justify the fact that all the chairs in the room are pointed toward me, the lights are aimed at me, and I have this device that makes my voice louder than anybody else’s. You better go up there and break a sweat, somehow or other.”

With his self-described “theatrical” songs serving as script, David Olney does just that, one inspired role after another, and his fellow singer/songwriters could want no better role model.