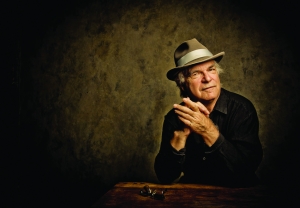 David Olney recalls a childhood night in his native Rhode Island, helping his Little League team raise money for the Jimmy Fund at a drive-in theater. The movie, a western, unfolds from several contrasting points of view. “All these conflicting stories were acted out. You'd see it from different angles, and that stayed in the back of my mind.”

On his new mini-album “Robbery & Murder,” Olney takes a similarly multi-faceted look at two love affairs. Among those telling us their side of the story is a gold diamond ring, but that's nothing unusual for Olney. He is, after all, the one who gave voice to the iceberg's rapacious lust in the chilling “Titanic.”

While the twin threads of “Robbery & Murder” alternate and interweave around a common theme the songwriter calls “hardcore romantic negotiation,” their differences could not be more stark. The Betty & Dupree tunes are rollicking odes to marital bliss -- at a price -- while the Delia songs inhabit the dark regions of cowardice, betrayal and regret.

Olney doesn't defy categorization so much as he rises above it. There is simply no one else like him. Singer/Songwriter? By definition. And Picasso was a painter. But as one reviewer said, “Olney stands out like a jalapeño in a bowl of vanilla pudding.” Americana artist? Sure. He draws from the many deep roots of American music, but what he grows from those roots is unmistakably unique.

Over the course of four decades and 25 critically acclaimed albums, Olney's unforgettable songs and powerful performances have attracted a devoted following the world over. Such luminaries as Emmylou Harris, Del McCoury and Linda Ronstadt have recorded his songs, and Townes Van Zandt famously listed him among his four favorites -- along with Dylan, Mozart and Lightnin' Hopkins.

Olney's musical path brought him to Nashville in 1973, that city's equivalent to Paris in the 1890s. He fell in with a creative cabal (Guy Clark, Steve Earle, Townes Van Zandt, Rodney Crowell, John Hiatt, et al.) whose new attitudes and creative chance-taking broadened and deepened the scope of Music City songwriting.

In the early 1980s Olney formed a roots rock band, the X-Rays, resulting in a trail of legendary live shows, two well-received albums, and an appearance on Austin City Limits. Then in 1986 came his first solo album, the stunning “Eye of the Storm” (Philo/Rounder), where the singer says he found his voice as a songwriter.

In performance, Olney is a revelation. The shows are seamless and riveting, never more so than in the company of chameleonic multi-instrumentalist Sergio Webb. Since 2007, Webb has added his sonic sorcery to Olney's songs, enriching and embellishing them with a near-brotherly empathy.

Music's not the only muse to wink at Olney. His forceful recitations of classic poetry dot the YouTube landscape; his weekly webcast “You Never Know” gives a personal, conversational glimpse behind the curtain to both the songs and the songwriter; and his short story “A Sign from God” is a highlight of the 2009 songwriters' anthology Amplified.

But always the mistress is music. “That's the story I'm sticking to,” says Olney. “That was the way I wanted to spend my life -- doing music. And that’s what I’ve done.”

And so the distinct and very different love stories of “Robbery & Murder” complete the project called “Body of Evidence,” and complete it with typical intelligence, fire and finesse. But the David Olney story goes on, the evidence accumulates and the case is a long way from closed.