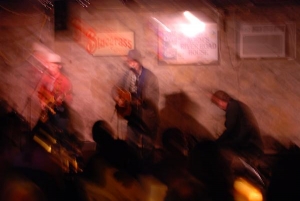 Norm's River Roadhouse is situated about 10 miles, or 50 years, from downtown Nashville, depending on your point of view and state of mind. Its early history is somewhat murky. It may hvae been a stop on the underground railroad before the great unpleasantness. Kentucky moon shiners traveling by boat down the cumberland river unloaded their cargo here, safe from Nashville's revenuers. Lucille Simpson, known as "the black widow," ran a brothel and gaming house on this spot during the roaring twenties. IN recent years it has serviced a many wandering biker after a long day of mayhem. Norm's is the last bar one encounters before reaching Cumberland Heights Rehab Center. Its not Carnegie Hall. Since Norm took over the premises, it has become the perfect beer and barbecue joint, not to mention music venue par excellence. The road house is not an easy place to reach, so those hearty souls who make the pilgrimage are there because they want to be. As someone who plays Norm's on a fairly regular basis, I can tell you the vibe is the best. So it the sound. Spirits who haunt the Cumberland River as it meanders by Norm's backdooroften stop to make a room that holds fifty people feel like the L.A. Coliseum. Norm's rocks. I am confident these performances also rock Hope you agree.
-- David Olney

Over an impressive professional career spanning four decades, David Olney has built a reputation not as a kind-hearted troubadour, but rather as a performing songwriter with a sharp literary mind that often cuts to the bone of the human condition. Whether the subject matter is heartbreak or armed robbery, Olney's cinematic style and fearless approach to lyric writing have won him a reputation as a kind of musical outlaw. Listening to his new CD, One Tough Town, is like watching a Sergio Leone western: it's gritty, smart and dangerous and you can't take your eyes off the screen.

Awarded the "People's Choice" at the Moab Folk Festival in November and having played the Hardly, Strictly Bluegrass Festival in Golden Gate Park & the Kerrville (TX) Wine & Music Festival this past Fall, David & Sergio are touring as a duo in support of Mr. Olney's critically acclaimed current studio album - "ONE TOUGH TOWN" (Red Parlor Records). The new CD has earned a spot on several 2007 "Best Of" lists online and in The Rochester (NY) Democrat & Chronicle, The Nashville Scene (TN), The Montreal Gazette (Canada), Rhythms Magazine (Australia) and others.