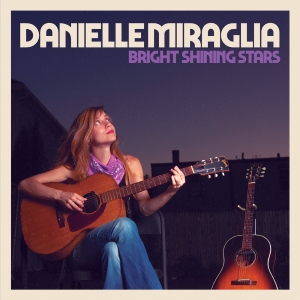 Explosively gifted Boston-based singer, songwriter and guitarist Danielle Miraglia (Murr-AH-lee-a) has been smashing pigeonholes and blowing away audiences and critics for some time now. Known for her performances as an acoustic solo artist and with her band the Glory Junkies, Danielle straddles the worlds of Folk/Blues and Roots/Americana with style, intelligence, and impact. She has been compared to Bonnie Raitt, Rory Block, and a Lucinda Williams with a sense of humor. Danielle is nominated for a 2020 Boston Music Award for "Blues Artist of the Year" and her band the Glory Junkies shared that distinction in 2018 and 2019; and Danielle was nominated for a 2015 Boston Music Award for “Singer-Songwriter of the Year.” BRIGHT SHINING STARS, Danielle’s new solo acoustic album on the VizzTone label, highlights her bluesy one-woman band sound, including some originals and covers paying homage to influences like Big Bill Broonzy, Bob Dylan, Janis Joplin and more. She is joined on selected tracks by guitarist Peter Parcek, viola player Laurence Scudder and harmonica player Richard Rosenblatt.