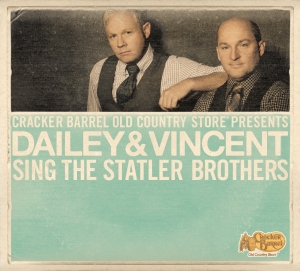 When Darrin and I learned that we would be recording a CD for Cracker Barrel we were ecstatic. The biggest reason was because both Darrin and I love eating at Cracker Barrel and secondly because we were told by Rounder and Cracker Barrel that we could record my dream album Dailey and Vincent Sing the Statler Brothers, a bluegrass tribute that includes twelve of our all time favorite Statler songs.

Darrin and I have always been huge Statler Brothers fans. Harold, Don, Phil, Jimmy and the late Lew Dewitt were my childhood heroes. Over the past few years we were blessed to have shared a little history with this great quartet. On June 29th, 2008, we sang "Do You Know You Are My Sunshine?" as part of the ceremony inducting the Statlers into the Country Music Hall of Fame in Nashville. What an honor this was for us. Since then we have gotten to know the Statlers and we are honored to sing a Bluegrass tribute to them. We hope that you enjoy listening to our versions of these songs and hope that they bring back memories for you as they have for us.

To the Statler Brothers this is our salute to you!

Too Much on My Heart
(Lester James Fortune/Songs of Universal, Inc., BMI)

Do You Know You Are My Sunshine
(Donald Sidney Reid, Harold W. Reid/ Songs of Universal, Inc., BMI)


What is today’s hottest new bluegrass act doing, singing songs of a Hall of Fame quartet that are 25, 30 and 40 years old? Why, spicing them up, of course.

Dailey & Vincent proclaimed themselves fans of the classic country group The Statler Brothers from the earliest days of their career, and have included updated versions of Statler songs on their prior albums. Now, they’ve produced a whole set of such revivals.

The Statler Brothers ruled the country hit parade in the 1970s and 1980s. They were named the Country Music Association’s Vocal Group of the Year a still-unequalled nine times. During their heyday, they racked up 33 top-10 hits on the Billboard country charts. Dailey & Vincent have dusted off nine of them here and tossed in three more Statler favorites for good measure.

These new versions highlight what fine, sturdy songs the legendary group created. Dailey & Vincent turn “Elizabeth” into a bluegrass waltz with a jaw-dropping, a cappella finale. “My Only Love” is taken at a slow and stately pace that brings out its melodic loveliness. “Susan When She Tried” is scampering, and “Hello Mary Lou” is jaunty. On “I’ll Go to My Grave Loving You,” Dailey & Vincent stay close to the original Statler arrangement, but they feel free to take some stylistic liberties with “Bed of Roses” and the iconic “Flowers on the Wall.”

Jamie Dailey, Darrin Vincent and their band mates possess some of the most thrilling voices in contemporary bluegrass. Even before the group’s debut CD was released, they earned a spontaneous standing ovation during a 2007 showcase at the International Bluegrass Music Association's Fan Fest. At the following year’s IBMA Awards Show, Dailey & Vincent were crowned Bluegrass Entertainers of the Year, a title they have since retained.

Darrin Vincent grew up performing in a family band. From 1990-97, Darrin backed John Hartford, and from 1997-2007, he served as a sideman in Ricky Skaggs’s Grammy® award-winning band Kentucky Thunder. Meanwhile, from 1998-2007, Jamie
Dailey was singing tenor in Doyle Lawson’s celebrated and much awarded band Quicksilver. Together, Dailey & Vincent are a force of nature.

In June 2008, The Statler Brothers were inducted into the Country Music Hall of Fame. Dailey & Vincent were there to honor their heroes by singing “Do You Know You Are My Sunshine.” The virtuoso performance drew gasps and a standing ovation from the audience.

If you weren’t one of the invited guests, don’t fret. Now you can hear for yourself what all the excitement was about.