Crystal Armentrout - As It Should Be 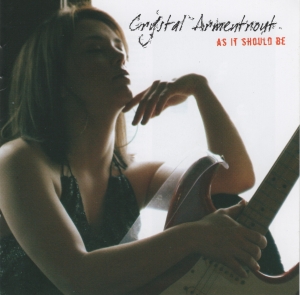 
"Audiences are amazed at the way this young lady handles a telecaster" - Samantha Redd, Shake! Magazine

"She has shown the local rock-and-roll scene that there's just as much importance in lyrics and songwriting as in instrumentation. Crystal has grown from an excellent lead guitar player to a mature folk-rock songwriter." - Joe Dockery, Founder of Fortune Williams Music Festival

"...writing, recording, promoting, booking, and networking. This is a woman on a mission... All I can say is you can hear the train coming and the train is Crystal Armentrout." - Barye Cassell, Nashville Music Guide


“As It Should Be,” Crystal's first CD for the Nashville label scheduled for release August 26, 2019, showcases the full range of Armentrout’s musical abilities. Moving effortlessly between modern rock, adult contemporary, old-school soul, funk and roots music, she proves to be a masterful interpreter of virtually any style of music that she chooses to undertake. Her current single is “Since You’ve Been Gone.”


Crystal Armentrout is one of the few performers who can accurately be described as embodying the concept of the total, consummate artist: A versatile singer who possesses a voice of incredible technical ability as well as emotional depth, she’s also a virtuoso guitarist who combines a variety of influences: including Hendrix, Clapton and Bonnie Raitt.

A true multi-talent, Armentrout is also accomplished on more than ten other instruments: including bass, keyboards, saxophone, drums and mandolin.

A native of Staunton, Virginia, Crystal started her musical career by playing saxophone in school ensembles, before later taking up drums and guitar in a rock music context. (By the age of 17, she had begun working in an all-female band that was influenced by acts such as Joan Jett and Vixen.)

Over the next several years, she developed a reputation as an outstanding lead guitar player and singer-songwriter in the DC Metro area and throughout the Mid-Atlantic region, opening for national acts such as Jeff Healey, .38 Special, Molly Hatchet, Indigenous and The Guess Who.

Relocating to Nashville in 2000, she began honing her already-considerable songwriting skills by collaborating with local writers - while still continuing to perform regionally in cities such as Atlanta, Knoxville, Chattanooga, and Charlotte, North Carolina.

After cementing her reputation as a dynamic, charismatic live performer with two self-produced CD releases, Armentrout began work on a third effort at Dark Horse Studios in Franklin, Tennessee (where artists such as Faith Hill, Alison Krauss and Neil Diamond have recorded previously.)

Upon hearing the initial recorded tracks, Gary Walker, owner of Great Escape Records (a local independent label) took notice of her talents and signed her to a deal.