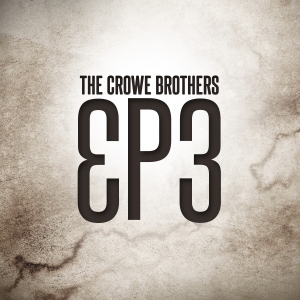 For this project, Josh (guitar) and Wayne (bass) not only surrounded themselves with excellent musicianship—Brian Blaylock (banjo), Ashby Frank (mandolin), Steve Thomas (fiddle, Dobro, guitar)—but they tapped a very deep well of true craftsmanship in songs from Carl Jackson, Glenn Sutton, Kathy Louvin, Chuck Pearson, and Hank Snow. "Don't Leave Him Hangin'" (Jackson/Louvin/Pearson) is delivered with such conviction and believability, that if the listener hasn't chosen Jesus by the song's last note, they soon will. And while the Crowe Brothers are decidedly bluegrass, they have no trouble showing their country soul side with "I Can't Be Your Fool Anymore" (Jackson/Sutton). "When my sweet friend, LuAnn Adams Smith, approached me about songs for the Crowe Brothers, I knew immediately I wanted to pitch them 'Don't Leave Him Hangin' and 'I Can't Be Your Fool Anymore.' The boys bring a very 'Louvinesque' style to their music and I knew without a doubt they could capture the same authenticity both tunes were purposely written with, almost as if Ira & Charlie themselves were doing the harmonizing," says Carl Jackson. "A little extra added bonus on the whole thought process is that one of my co-writers on 'Don't Leave Him Hangin' is none other than Kathy Louvin, daughter of the great Ira Louvin."

Rounding out the EP, "Golden Rocket" was originally written and recorded in 1960 by country music legend Hank Snow and was recorded by The Crowe Brothers in tribute to Jim & Jesse McReynolds. For some extra musical flair, the song is given a special "bluegrass-a-billy" treatment with the addition of "boogie" guitar provided by Steve Thomas. EP3 offers a virtual full-album listening experience with its three songs - proving the Crowe Brothers' 40 plus years of music have been well preserved and is as viable today as when they started decades ago.


Bio:
With Josh Crowe on guitar, and Wayne Crowe on bass, the Crowe Brothers’ music career has spanned more than four decades and a dozen recording projects. Growing up in Clayton, Georgia, Josh and Wayne began playing music as boys with their dad, Junior Crowe, and with various local bands playing bluegrass and gospel. In 1975, they teamed up with Raymond Fairchild and worked the bluegrass festival circuit and traveling the country with him full-time for the next 15 years, and relocated to Maggie Valley, NC. Over the years of their career, the Crowe Brothers have made notable appearances on the Grand Ole Opry and at the Library of Congress, as well as numerous National TV show performances, including the Bluegrass Spectacular, Fire on the Mountain, Nashville Now, I-40 Pickin’ at the Paradise, and American Music Shop.

To their credit, they have received recognition from the SPBGMA association (Society for the Preservation of Bluegrass Music of America) with awards for Best Bluegrass Rhythm Guitar and Best Instrumental Band, and were nominated by IBMA (International Bluegrass Music Association) for Emerging Artist of the Year. In 2009, their recording of “Cindy Mae” (written by Cody Shuler), went number one on several bluegrass charts. In 2011, “He Could Pick the Hound” (penned by Steve Watts), also reached the number one slot.
4
What's This
Advertisement