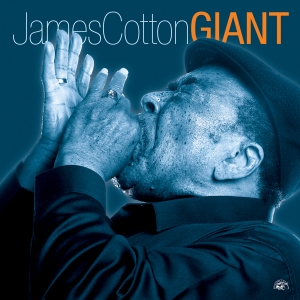 Between his huge, blast-furnace sound, his larger-than-life personality, and his massive frame, Grammy Award-winning blues harmonica master James "Mr. Superharp" Cotton is a blues giant in every respect. Cotton, who in 2010 celebrates his 66th year as a professional musician (starting at the age of nine), has recorded almost 30 solo albums, including two highly-regarded releases for Alligator in the 1980s and the famed Harp Attack! with Junior Wells, Carey Bell and Billy Branch in 1990. The New York Daily News calls Cotton "the greatest living blues harmonica player." The New York Times adds, "Cotton helped define modern blues harmonica with his moaning, wrenching phrases and his train-whistle wails."

Over the course of his storied career, Cotton has seemingly done it all. As a small boy he learned harmonica directly from Sonny Boy Williamson. He toured with Howlin' Wolf, recorded for Sun Records, and spent twelve years with Muddy Waters before stepping out on his own. Leading his own band, he rose to the very top of the blues and rock scenes, touring the world non-stop and earning his reputation as one of the most powerful live blues performers in the world.

Cotton is one of the few bluesmen to have the power to literally suck the reeds out of the harmonica from the pure force of his playing. He brings that power back to Alligator Records with his new CD, Giant, a ferocious blast of brash boogie blues. Produced by Cotton, Jacklyn Hairston and Derek O’Brien and recorded by Stuart Sullivan at Wire Recording in Austin, Texas, Giant features twelve tracks, including four new Cotton originals and co-writes, alongside songs made famous by Muddy Waters, B.B. King, Ivory Joe Hunter and others. Throughout his career, Cotton has always led great bands, and the players on Giant are no exception. With guitarists/vocalists Slam Allen and Tom Holland, bassist Noel Neal and drummer Kenny Neal, Jr., Giant is not just a reminder of Cotton's legendary status, it is a vibrant, hard-hitting album made by one of the true blues masters.

Born in Tunica, Mississippi on July 1, 1935, Cotton actually grew up on a cotton plantation. The youngest of eight brothers and sisters, he received a fifteen-cent harmonica for Christmas as a very small boy and mastered it almost immediately. He began listening to Sonny Boy Williamson's King Biscuit Time broadcasting from Helena, Arkansas on KFFA, and learned to imitate the older bluesman note for note. In 1944, after both of Cotton's parents had passed away, his uncle took the nine-year-old boy to Helena to meet his hero. The child's talent amazed Sonny Boy, who took the boy under his wing, and Cotton spent many nights traveling with Williamson to juke joints all over the area. Too young to enter the clubs, the youngster often played for tips outside, sometimes drawing crowds to rival Sonny Boy's.

When Williamson left for Milwaukee in 1950, Cotton, now 15, took over Sonny Boy's band. While this arrangement didn’t last beyond a few gigs, Cotton got his first taste of band leading. He then joined Howlin' Wolf's band, touring with him all over the South. Cotton learned all about the road from Wolf, and, though only a teenager, he was determined to make a name for himself. By 1952 he had moved to West Memphis, gigging often in local juke joints and clubs and, along with drummer Willie Nix, hosting a local radio show sponsored by Hart's Bread ("No way for you not to know it 'cause the red heart is there to show it.").

In 1953, the teenage Cotton received word that Sun Records owner Sam Phillips wanted to record him. He cut a total of four sides for Sun in 1953-54, including the classic "Cotton Crop Blues." In 1954, Muddy Waters came through Memphis without Junior Wells, his harp player at the time. Waters was well aware of Cotton's rising reputation and asked the young harpslinger to join his band. Cotton headed to Chicago with Waters, staying by his side for over a decade, becoming Muddy's trusted confidante and the leader of his backing band.

For the first few years that Cotton was with Waters, Chess Records still insisted on having Little Walter record with Muddy. But that changed beginning in 1958, when Cotton joined Waters in the studio, recording on many of Muddy's later classic sides, including "She's 19 Years Old" and "Close To You." Cotton convinced Waters to perform and record "Got My Mojo Working," and can be heard playing on the definitive version of the song on Waters' 1960 Chess LP, Muddy Waters At Newport.

By 1966, Cotton was ready to head out on his own. He first recorded album sides under his own name for the Chicago/The Blues/Today! series on Vanguard, and along with Otis Spann, cut "The Blues Never Die!" for Prestige. He made his first solo albums—three for Verve and one for Vanguard—in the late 1960s, with bands featuring outstanding musicians, including famed guitarist Luther Tucker and master drummers Sam Lay and Francis Clay. With his gale-force sound and fearless boogie band (later featuring Matt "Guitar" Murphy), it wasn't long before he was adopted by the burgeoning hippie audience as one of their own. Cotton shared stages with Janis Joplin, The Grateful Dead, Led Zeppelin, B.B. King, Santana, Steve Miller, Freddie King and many others. In 1969 he appeared on Hugh Hefner's groundbreaking Playboy After Dark syndicated television program.

Cotton was universally renowned as one of the hardest-touring and most popular blues artists of the 1970s. His acrobatic showmanship (he often did somersaults on stage) and full-throttle blues kept him in demand at concert halls all over the country. He played the Fillmore East in New York, the Fillmore West in San Francisco and every major rock and blues venue in between. During the decade, he cut three albums for Buddah and one for Capitol. He rejoined his old boss Muddy Waters for the series of Muddy albums produced by Johnny Winter, starting with Hard Again in 1977. Cotton also guested on recordings by Koko Taylor and many others. He was joined on his own albums by stars like Todd Rundgren, Steve Miller and Johnny Winter.

Cotton joined Alligator Records in 1984, releasing High Compression and Live From Chicago: Mr. Superharp Himself!!! (which earned him the first of his four Grammy nominations). In 1990 he joined fellow Chicago harp masters for the all-star release Harp Attack!. He won a Grammy Award in 1996 for his Verve album, Deep In The Blues, was inducted into the Blues Hall Of Fame in 2006, and the Smithsonian Institution has honored Cotton by adding one of his harmonicas to their permanent collection.

During the 2000s Cotton has continued recording and touring relentlessly, playing clubs, concert halls and festivals all over the world, electrifying audiences wherever he performs. Today, while turning over the singing duties to his road band, Cotton can still blow the reeds right out of a harp.

Giant reaffirms that James Cotton's high-compression blues harmonica playing is a true force of nature. As The San Francisco Examiner says, "James Cotton is an inimitable blues legend. His wailing harmonica blows them away. His improvisations on the blues are full of fun and good humor. The blues don’t get much better."

In June 2010, Cotton was honored at New York's Lincoln Center, where his friends Hubert Sumlin, Pinetop Perkins, Taj Mahal, Shemekia Copeland and others paid tribute in an all-star concert. There James Cotton played to yet another sold-out venue, with fans cheering the man known worldwide as "Mr. Superharp," an undisputed giant of the blues.