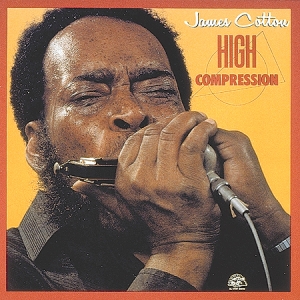 ASK ANY COTTON FANATIC -- there are generations of them by now -- the man is the best of the nothin'-but-a-party breed of blues blasters. Good times are Cotton's priority, and, on stage or on vinyl, he upholds that ageless tradition of Great Blues as Great Party Music. And Cotton should know how; he's got years in the blues blowing business from which to draw both tunes and inspiration, and to which he adds the most contemporary of get-down rhythms. It's that up-to-date houserockin' formula that makes this disc happen. Half the cuts here feature Cotton's young touring band, led by guitarist Michael Coleman, doing funky originals like Cotton's own “Superharp” and Steve Miller's “Ying Yang,” and updating Bobby Bland's “Ain't Doin' Too Bad” and Junior Parker's “No Cuttin'” Loose with 1980's boogie.

Then there's Cotton's more traditional, straight-ahead blues side. Aided by a hand-picked, all-star Chicago lineup (including Magic Slim, Chi-town's grittiest string bender), Cotton charges through Washboard Sam's “Diggin' My Potatoes” and gets down for the deep blues on “23 Hours Too Long” (and check out how his voice hangs on to the last line with a Muddy-like moan).

High Compression is a good name for this record, the distilled product of a legend-studded career that stretches back to 1944. Then, at the age of nine, Cotton set forth with harmonica in hand from Tunica, Mississippi, in search of his idol Sonny Boy Williamson, who opened his home to the strong-willed youngster. Six years later, Cotton was off to Memphis, playing for the up-and-coming Howlin' Wolf, and recording as a leader some of the finest blues ever issued on Sam Phillip's Sun label. By 1954, Cotton had made it to Chicago, winning a blues harmonica man's most coveted job -- blowing with the great Muddy Waters. It was a twelve-year association, with Cotton leading Muddy's backing band and his powerhouse harmonica sparking such classic tracks as “Nineteen Years Old,” “Walking Through The Park” and, of course, “Got My Mojo Working.”

Since 1966, Cotton's been leading his own band, first in Chicago, and then, as a young rock audience got hip to the hard-driving sounds blowing out of the Windy City, on the road as well. His boogie 'n' blues combination attracted the cream of rock players as well as bluesmen; Cotton albums have been produced by Mike Bloomfield, Todd Rundgren and Allen Toussaint and feature appearances by Johnny Winter, Steve Miller and James Booker. In the late '60's and early '70's, James was a regular on the Fillmore scene, appearing with The Grateful Dead, Quicksilver, The Jefferson Airplane, J. Geils, and regularly with Janis Joplin and Paul Butterfield.

And Cotton has carried on into the '80's, touring constantly, playing literally hundreds of nights every year. He's entertained legions of listeners to unforgettable walk-in/crawl-out shows. Ask any survivor of a Cotton performance; along with all that sweating and that slashing, tearing harmonica, there's always a great big grin on Cotton's face, daring anyone else to enjoy himself more.

So, if you're ready for that kind of challenge, all of that live, motivatin' energy is packed onto this platter, and, though you can't see it, you can feel that big grin there, too.