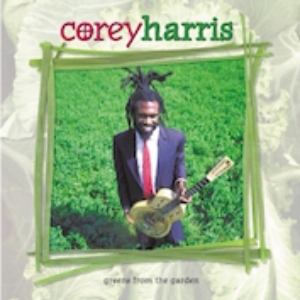 A native of Denver, Colorado, Corey Harris fell in love with music at an early age, and made his own music with a toy guitar he received at the age of three. Now 31 years old, Corey grew up watching his favorite music television shows - including Hee Haw and Soul Train - and listening to all the popular music of the day. But when his mother turned him on to a real guitar and the blues of Lightnin' Hopkins, Corey - just 12 years old - found his true musical calling. He learned to sing and play by ear, listening to his favorite albums over and over again until he knew all the parts. He sang in church groups, played trumpet and then tuba in his junior high school marching band, and played in a rock band in high school.

After attending Bates College in Maine, Harris, along with his newly acquired National steel guitar, left for Cameroon in West Africa in 1991. While there, Harris' love for acoustic blues grew, as did his understanding of the importance of the indigenous juju music. The polyrhythmic drumming associated with juju is clearly reflected in Harris' propulsively rhythmic, drum-like guitar playing. After returning to the United States, Harris moved to rural Louisiana and began teaching French and English, all the while continuing to play his music and refining his craft by moonlighting as a street musician in nearby New Orleans. Before long, Harris was not only playing on the streets and in coffeehouses, but colleges and clubs as well.

Harris went into the studio in 1994 with producer Larry Hoffman, recording the traditional blues he honed as a street musician. The 1995 release of Between Midnight And Day catapulted Harris to international recognition. Critics, fans and fellow musicians could barely contain their enthusiasm. "Harris brought time to a stop," raved the national edition of The New York Times, "invoking the ghosts of Robert Johnson, Lightnin' Hopkins and Howlin' Wolf." After reading the article about Harris in The New York Times, singer Natalie Merchant bought a copy of Between Midnight And Day and immediately invited Harris to open every date on her West Coast tour, and even had him join her on stage for her finales. He's toured Europe many times - including a tour as part of Alligator Records' 25th Anniversary celebration - and toured Japan in 1997.

With his 1997 follow-up, Fish Ain't Bitin', Harris added socially conscious songwriting and a few musical twists to his repertoire. Taking the solo acoustic sounds of Between Midnight And Day and adding a full New Orleans brass section on four songs, Harris mixed nine originals so entrenched in the tradition that they blended seamlessly with blues covers to create his own brand of music. Robert Christgau said in The Village Voice, "After a debut that established his mastery of the Delta idiom, [Harris] does something really hard - proves he's big enough to fool around with it...His virtuosity springs to life."

Successful solo performances at festivals (including the Chicago Blues Festival and the New Orleans Jazz & Heritage Festival) and clubs earned Corey more critical praise, which brought him even more famous fans. When Billy Bragg told Natalie Merchant he wanted a blues singer for the Woody Guthrie project he was working on, she immediately brought him Harris. Bragg, Harris, Merchant and the band Wilco all hit it off. The resulting album, Mermaid Avenue (on which Harris plays guitar and sings on a few songs), received unanimous praise and was nominated for a Grammy award. During those sessions, Harris sang and wrote music for a number of Guthrie lyrics, including the song “Teabag Blues,” which, along with vocal help from Bragg, is included as a bonus track on Greens From The Garden, an album The Chicago Tribune called "a landmark effort."

Vu-du Menz was recorded in four days in January 2000 at Dockside Studios in southwest Louisiana. Although separated by 20 years in age, Harris and Butler are of one musical mind, communicating almost telepathically throughout the album's 15 songs (including 13 originals), which range in subject from timeless expressions of love to biting social commentary. The songs on Vu-du Menz range from straight-ahead blues (“Song Of The Pipelayer”) to ragtime (“If You Let A Man Kick You Once…”) to New Orleans funk (“Voodoo Man”) to jazz (“L'Espirit de James”) to gospel (“Didn't The Lord Deliver Daniel?”). Harris' supple guitar playing and husky vocals perfectly blend with Butler's genre-defying piano playing and huge, soulful singing voice throughout each and every song on this tradition-based, forward-thinking album.

Over the course of his three Alligator releases, Corey Harris emerged as one of the most visionary and popular of the new generation of acoustic-based blues and roots performers. Harris' third Alligator release, 1999's Greens From The Garden (with Butler guesting on two songs), spanned the musical landscape by melding reggae, ska, hip-hop, country, ragtime and Delta blues. And since exploding on the blues scene in 1995, Harris has appeared on CNN's Showbiz Today, NPR's Weekend Edition, Fresh Air, and World Café, as well as CBS Radio's House Of Blues Radio Hour. Greens From The Garden received regular rotation airplay on 125 stations and made the charts at Gavin, Album Network, FMQB, and CMJ. The album also received rave reviews from Rolling Stone, Guitar Player, Request, The Washington Post, The Chicago Tribune, The London Times and many other national and regional publications. Harris has toured extensively on his own and supported artists such as The Dave Matthews Band, Natalie Merchant, Billy Bragg and, most recently Ben Harper. "An authentic voice and an eclectic vision," declared The San Francisco Bay Guardian.

With vu-du Menz, Corey Harris and Henry Butler added another remarkable chapter to their still-evolving success stories. Together or on their own, Harris and Butler represent the best the new generation of acoustic blues - and New Orleans music - has to offer. And with their broad vision and deep musical roots, there's no question Harris and Butler will keep pushing the roots music envelope further, while satisfying hungry music fans for many years to come.