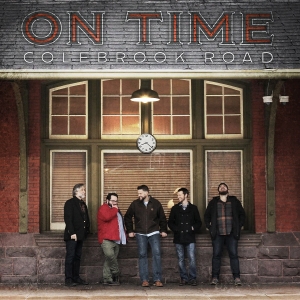 
Fresh from the Keystone State, Mountain Fever Records is pleased to release new music from Colebrook Road. "On Time" is the band's first single from their upcoming album due out this spring.

"On Time" is written by band member Jesse Eisenbise and focuses on the struggles of day to day life. Listeners will love the song's upbeat and progressive sound, but will also appreciate its traditional bluegrass foundation.

In addition to award-winning members from an array of backgrounds, the songs performed are almost exclusively original compositions with varying themes. The band writes intricate and dynamic arrangements filled with both vocal and instrumental harmony that creates an interestingly modern, complex, and varied sound while still adhering to the larger bluegrass genre. Colebrook Road is a standout string band.

Following the 2012 release of their eponymous first effort, the group released their sophomore album, “Halfway Between,” on May 7, 2016. Like their first, the album features all-original vocal and instrumental songs- ten studio tracks, plus a bonus live recording from their contest win at the Podunk Bluegrass Festival.